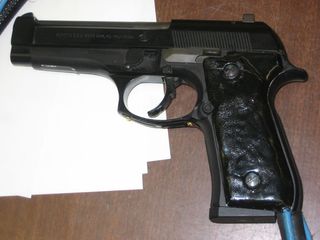 A 2006 version of the gun that relies on a Dynamic Grip Recognition system to prevent it from being fired by an unauthorized shooter.
(Image: © NJIT)

Police in New Jersey are testing smart guns that rely on biometric sensors in the grip to prevent weapons from firing if they detect that the trigger squeezer is not authorized to shoot them.

The handguns fire only when their internal circuitry and software recognizes the grip "profile" of an authorized shooter—that is, the particular way an individual holds a gun as it is about to fire based on the shooter's hand musculature, strength, bone structure and hand-brain communication habits.

The new technology, which works on semi-automatic handguns—typical police-issue weapons as well as the handgun of choice among most homeowners, would prevent the use of a gun by a child or someone who stole the gun, however, it would do nothing to thwart the misuse of a gun by the adult and legal owner, as occurred earlier this week at Virginia Tech when a student killed 32 people and himself during a morning rampage.

"The technology would have allowed him to fire it, which is not something we wanted to see," said project director Donald Sebastian of the New Jersey Institute of Technology. "Our Dynamic Grip Recognition technology is not designed to see if you have criminal intent."

In the aftermath of the deadliest shooting in U.S. history, experts are discussing whether prevention of similar events in the future could come from stiffer gun laws, stronger oversight of troubled youths and faster notification of campus and other communities when police become aware of a violent crime.

Meanwhile, the NJIT smart gun is now 98 to 99 percent accurate at recognizing authorized shooters, up from 90 percent a couple years ago. The goal is 99.99 percent accuracy before the gun would be manufactured and sold commercially, Sebastian said.

The gun is tested weekly by a group of university police at a local firing range and put through its paces under different firing conditions such as right-hand versus left-hand shooting, shooting from a kneeled position and shooting from behind a partition at a target.

A grip on the problem

Initially, the New Jersey State Legislature authorized Sebastian in 1999 to investigate what could and could not be done to make a safer handgun.

A breakthrough came when Sebastian's colleague Michael Recce said that the biometrics of handwriting analysis on touch pads was based on pressure over time, not the shapes of the letters.

"We made the mental leap that the way we grab things, like a tennis racket or a golf club, is a reflexive thing, a trained thing, that is reproducible," he said.

The project then created a database of grip profiles based on hundreds of subjects, each one generating effectively a short movie, not a snapshot, of information about how each one holds a gun while pulling the trigger.

With gun grips, individuals generate a gripping pattern that evolves within the first tenth of a second of a trigger pull, Sebastian said, faster than human reaction speed. "What is unique for each individual is the coordinated act of how you apply leverage to pull the trigger back," he said.

Within that tenth of a second, the electronic circuitry in the gun also is fast enough to prevent the gun from firing if the grip profile fails to match that of an authorized user profile stored in the gun's circuitry.

For a conventional gun, any displacement of any of the chain of pre-firing events that must unfold across a collection of pins, springs and levers inside the gun will stop it from firing. In an electronic gun, the shot can be prevented by interrupting the zap of electricity that touches off the primer in the cartridge.

Other ideas for gun safety in the past 10 years have included PIN numbers and radio-frequency identification tags on guns and operators, but these can be stolen.

These might work in professional settings, Sebastian said, "but biometrics is better for the home."