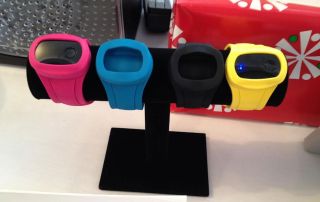 A new activity tracker for kids, called KidFit, was announced this week by the company X-Doria. Above, the device on display at a recent New York City tech event.
(Image: © Rachael Rettner for Live Science)

As fitness trackers like Fitbit Zip and Jawbone Up gain popularity, it was only a matter of time before kids got their own version of the activity-tracking devices.

This week, the company X-Doria announced the release of KidFit, an activity tracker for children ages 5 to 13. The device tracks sleep, but not steps or calories as regular fitness trackers do. Instead, it gives kids a daily goal of earning 100 points, which they rack up by being active. Parents can also customize their child's goals, the company said.

The app shares messages to encourage children to reach their goals, and congratulates kids on their accomplishments. Parents can also set "real world" rewards, like a new bike or an amusement park trip, the company said. [Best Fitness Tracker Bands]

The device comes in four colors (yellow, aqua, hot pink and black), has a "slap-band" wristband and is splash proof. It will be available in mid-August for $49.99, and is also available now for pre-order (the first 1,000 to order get $10 off the regular price.)

In April, the company LeapFrog announced the LeapBand activity tracker for kids ages 4 to 7. This device tracks activity, and includes challenges such as "wiggle like a worm" that earn points. The tracker will be available soon, costing $39.99, LeapFrog said.