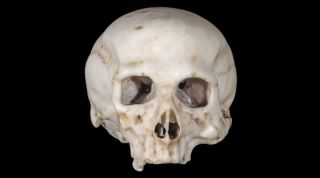 A researcher thinks this skull model is crafted from an agate-based mixture, or "mistioni," that Leonardo da Vinci was experimenting with in the early 16th century.
(Image: © Dr. K. Becker)

A miniature skull model that a German couple bought in an antique shop three decades ago could be a 500-year-old lost work of art created by the original Renaissance man, Leonardo da Vinci, a new study claims. But some art historians are wary of the attribution.

About one-third the size of an adult human skull, the handcrafted cranium is missing a lower jaw and a cheekbone, but otherwise, the milky-white model is remarkable for its anatomical detail.

"It's like looking at a car: If you open the hood of a car, you see the quality of the car," Stefaan Missinne, an independent Belgian researcher based in Vienna, told Live Science. Missinne thinks the skull has that kind of under-the-hood quality, clearly made by someone with an intimate knowledge of anatomy. [Anatomy Meets Art: Da Vinci's Drawings]

Leonardo learned anatomy, sometimes by dissection, as a way to improve his drawings and paintings of the human form. But he didn't always get everything right. The great Italian artist clung to some medieval ideas about how the body worked, and Missinne thinks the skull and some of Leonardo's 15th-century anatomical drawings share the same errors, from the skewed sutures to the eye sockets that lead inside the cranium, like windows to the soul.

Missinne also argues that the skull shares characteristics with the old men in Leonardo's so-called grotesque drawings, with its bulging forehead and hooked nose. Missing one tooth, the skull has an overall "scurrilous impression," Missinne wrote, perhaps intended to capture the ugliness of old age.

"It may well be that Leonardo, who was known to be melancholic, and seems, as early as 1500, to have been troubled as he got older by the loss of eyesight, as he writes he needs 'occhiali,' meaning glasses and by sorrow, used this miniature skull in his late years as his personal sorrow stone," Missinne wrote in his article published last month in the academic journal Wiener Medizinische Wochenzeitschrift.

Too good to be true?

It makes for a good story, but art historians contacted by Live Science were skeptical of the claims.

Missinne admits in his paper that some of the evidence he presents "may be interpreted as circumstantial." He dated the skull to around 1508, arguing that the presence of iridium in the skull model (revealed through a chemical analysis) suggests that it's not carved from a single stone like alabaster, but rather crafted from an agate-based mixture, or "mistioni," which Leonardo was experimenting with during this time. Missinne also found a mention of a detailed skull in the inventory of Salai, Leonardo's pupil. [Leonardo Da Vinci's 10 Best Ideas]

Michael Kwakkelstein, of the Dutch University Institute for Art History, said he examined the skull in the late 1990s after the owners approached him.

"Although I was impressed by the detailed rendering and anatomical knowledge this miniature skull displays, the problem remains that we cannot compare it to any authentic Leonardo sculpture for the simple reason that none of his works in sculpture have survived," Kwakkelstein wrote in an email.

Leonardo expert Martin Kemp, professor emeritus of the history of art at Oxford University, also said he became aware of this skull and the attempt to attribute it to Leonardo several years ago.

"I was not convinced then, and am even less convinced now," Kemp told Live Science in an email. He said he didn't believe Leonardo would have tried to make an anatomical model intentionally grotesque.

"Whatever resemblances there are between the skull and Leonardo's drawings of skulls and sectioned skulls from 1489, these are overridden by the absence of the right zygomatic arch [cheek bone] and other asymmetrical deformations," Kemp said. "In his anatomical demonstrations, Leonardo specifically tries to avoid what he called 'monstrous' images."

Missinne argues that Leonardo wanted to know and learn why certain people had monstrous faces.

"Leonardo's interest in human nature, anatomy and any kind of freaky deformation, including facial ones is recorded and proven," Missinne told Live Science.

In the rare instances when works by Leonardo go on sale, they fetch exorbitant prices. In May 2013, Sotheby's brokered a deal to sell a recently attributed Leonardo painting of Christ known as "Salvator Mundi" for between $75 million and $80 million. In general, authentic Leonardo discoveries are uncommon — and often plagued by controversy — though apparently there is no shortage of claims.

"'New discoveries' of works by Leonardo are almost a weekly occurrence: they clutter my email box," one curator, who declined to comment on the paper, wrote in an email.