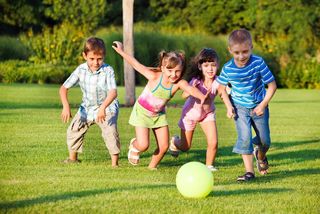 Most fitness trackers are designed for adults, but the devices might help researchers study physical activity in kids, experts say.

In a new study of 25 kids, researchers tested whether fitness trackers could be suitable tools for studying children's physical activity. The 7- to 10-year-olds tested three different fitness trackers — worn on the waist, wrist or upper arm — and one heart rate monitor. The children wore each device for a week, and later completed interviews along with their parents about which device they liked the best.

Children preferred the wrist-worn tracker, in this case, the Polar Active, over the waist-worn tracker, the Philips Actical, and the upper-arm tracker, SenseWear by BodyMedia. [Best Fitness Tracker Bands]

When studying kids' activity, even the most accurate tracker won't be useful if children don't wear the device, or can easily break it, so the goal of the survey was to find the types of devices that work best with kids, said study researcher Sara Schaefer, of the Foods For Health Institute at the University of California, Davis.

"A device, even if it works perfectly in theory, on a kid, it's a different story," Schaefer said.

"The [Polar Active] device was definitely the most popular among children," Schaefer said. "We got kids to wear it for an entire week, and got great data from that."

Kids said the Polar Active was comfortable to wear, and kept it on 98 percent of the time. The device also had a watch, and an animated figure that moved when the children moved, which the kids liked, Schaefer said.

In contrast, the SenseWear device did not fit well on many children, and it frequently turned itself on and off, and this made a noise that was sometimes disruptive. As a result, kids wore SenseWear just 28 percent of the time during the study.

The Polar Active was also the only waterproof fitness tracker in the study. It was deemed beneficial because it allowed researchers to measure water activities, and reduced the chance of kids taking off the device and forgetting to put it back on.

Based on the Polar measurements, nearly half of the children got at least an hour of moderate-to-vigorous physical activity per day. On average, the kids burned 1,590 calories per day, took a whopping 19,000 steps, and slept for nearly 10 hours.

Schaefer called the research a "stepping stone" for future work on wearable technology in kids. Since conducting this study, Schaefer has used activity monitors to study how physical activity levels in children relate to the risk of obesity.

Schaefer is also working in collaboration with the video game industry to develop a game that rewards children based on their activity data, for example, by giving them more "power" in the game for the number of steps they take. These types of games can help teach kids about their personal data, she said.

Today's fitness trackers have some limitations. For example, the devices detect motion with sensors called accelerometers, but these sensors do not accurately measure the work required to perform certain activities, such as pushing or lifting objects, or bike riding. In addition, some organized sports leagues prohibit players from wearing any devices during a game, which would prevent researchers from measuring that activity.

Schaefer is currently conducting studies in children to see how the Fitbit compares to the Actigraph, a device mainly used in scientific research settings, rather than by consumers.

The new study is published online today (May 22) in the journal Preventing Chronic Disease.