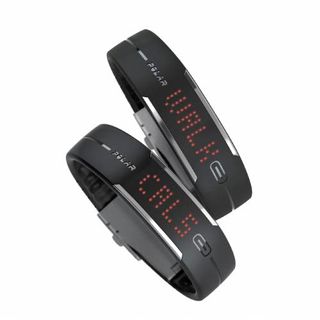 The Polar Loop band is marketed as the activity tracker that makes you move. Buy the Polar Loop >>>
(Image: © Polar)

The Polar Loop band sports all the basic functions of a fitness tracker — it measures sleep time, steps taken, activity time and levels, and calories burned — and it's waterproof, which allowed me to track my activity while swimming. The band, from Finland-based Polar, also displays the time of day, and costs $99.95 on Amazon, which puts it on par in price with Fitbit Flex and the Jawbone Up. And neither of those is waterproof, nor shows the time. I wore the Polar Loop tracker for more than a week, running, swimming, working out on an elliptical machine and exercising with kettlebells, to test out its mojo. Here's what I found.

The easy-to-use app, band comfort, time of day feature and waterproofness of the Polar Loop are big pluses for this fitness tracker. Its drawbacks include the tricky button on the band, and the limitations of the information tracked, which doesn't include sleep quality details, for instance; even so, for the basics the Polar Loop is fantastic.

The Polar Loop is extremely comfortable, though its plastic band is stiffer than the softer silicon material of the Bowflex Boost and Fitbug Orb. This fitness tracker must be cut to fit your wrist, which at first I thought would be complicated; but using the tiny tool that comes with the Loop to push out the clasp from both sides, and the measuring tape to figure out how much to cut off (also included), sizing was pretty simple, though a little tedious.

There's a video on the Polar website that shows you exactly how to fit your band, though I just looked at the diagram that came with it. (I should note that I first measured my wrist with the tape snugly around it, but was worried I would cut off too much, so I did the cutting in smaller increments. In the end I cut off exactly the number that I first measured.) After it is cut, the band is easy to get on and off by opening its metal clasp.

Once I figured out how to cut the band and reattach the fastener, the tracker felt amazing. Since it's cut to size, I didn't have to worry about it sliding all over, and its relatively soft rubber and light weight made it unobtrusive; sometimes I forgot I was wearing it and sleeping with it was seamless. The only time it did seem to get in the way was when I was doing kettlebells. During a move called the "clean and press," when the kettlebell flips over your hand, the kettlebell would hit my wrist, and the band, which was a little painful.

The only real problem I found with the design was the button used to display the time and activity data. The small button sits low in the band, so it was difficult to push, and I often had to use my fingernail or at least push it a couple times to get it to work.

The Polar Loop band links with software you can download from the Polar website, and with the Polar Loop app for iOS and Android. (Previously, the band worked only with iPhones, but now, it also works with Android devices.) I mostly used the phone app, since it synced up as soon as I opened it, showing me sleep time — which is calculated as the longest stretch of "down time" during a 24-hour period, according to the website — along with number of steps taken, calories burned and, my favorite, the little icons showing the amount of time spent in different activity intensities, from sleep to high intensity.

When I plugged in the tracker to my computer's USB slot, it updated everything there as well. The software also includes a calendar diary to keep track of all of your data, along with any notes you write.

Having the time of day was also a plus, though I couldn't figure out a way to get the time to always show up as the first item displayed (with the Nike FuelBand, if you "double click" on the button, it displays the time of day).

A downside of the Loop is that in order to view the data on each of your activities, you have to click, wait for the activity to load, and then click again for the next activity, wait, and so on. For instance, if I pushed the button and the display said "Step," if I wanted to see the number of steps I'd taken so far that day, I had to wait. If instead I wanted to see the next variable, such as "Calories," I had to keep clicking until the display read "Calories," and then wait to see the number. If you just click once it shows, for instance, the time and then the display turns off. And since it's tricky pushing the button, all this clicking ended up being a pain, so I usually just synced it with my phone app and looked at all the numbers on there.

The display on the iPhone app was extremely useful to show my overall activity time and levels for the day. The largest part of the app display shows a circle representing a 24-hour period, with the active time shown in shades of blue (the darker blue representing higher intensity activities). Immediately, I became aware of the amount of sitting time that pervaded my work week when I was parked in front of a computer screen, whereas on the weekends I had much longer active times.

The app also showed me whether my workouts were actually providing moderate or intense activity levels, but this actually seemed to be a product of how much I was swinging my arms while exercising. When I was on the elliptical at the gym, and not swinging my arms while "running," the Polar Loop seemed to register that as moderate activity, whereas when I swung my arms instead of holding onto the elliptical sides, the Loop registered that time as intense activity.

But while the Loop showed me the calories I burned based on my activity, there was no way to input calories eaten during the day.

Also, the sleep time always seemed to be at least an hour lower than my actual time in bed, and on one occasion it showed about four hours of sleep when I actually slept for about eight hours. In addition, there is no breakdown of quality of sleep, so it's not that useful if you want to figure out how to get a better night's sleep.

The FAQs on the Polar Loop website are terrific for answering questions about how things work and for troubleshooting.

The Loop seemed to do a great job of recording my activity time and level when I was swimming and working out with kettlebells. I wore the Loop while swimming about a mile at a time, and it showed most of it as intense activity, which is what it felt like physically to me.

Although you can't track advanced swim metrics (like laps or strokes) with the Loop, you can use this tracker with the Polar H7 Bluetooth Smart Heart Rate Sensor, which can record your heart rate underwater. Using a heart-rate monitor — which is something you can't do with most fitness trackers, including those from Garmin — can give you a better sense of the intensity level of your activity.

I enjoyed wearing this fitness tracker overall, because it gave me the basics without too many details.

The display on the iPhone app was motivational, as it gave me an overall picture of my day and how it stacked up to other days. However, the motivational alerts seemed a little generic and only somewhat motivated me. For instance, if I sat for lengthy periods I would get an inactivity alert that read: "You were sitting for quite a few hours. Try to break it up tomorrow."

Also, I was nearly always well above the daily goal set for me, which was about four hours of low-intensity activity a day. The Loop sets that time based on global recommendations for moderate and vigorous physical activity, your typical day (I sit in front of a computer most of the day), age and gender.

Polar Loop
Walmart
$72.93
View
We check over 130 million products every day for the best prices
View All Deals