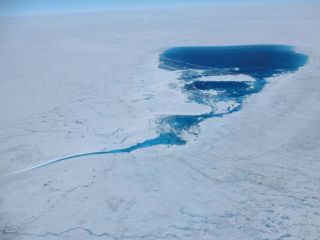 A supraglacial lake over the Greenland ice sheet in the Kangerlussuaq area photographed on July 21, 2012. The lake feeds a stream that will deliver meltwater to the low elevations where it will either flow to the ocean on the surface or dive into the ice to contribute to a hydrological pipeline of sorts.
(Image: © Marco Tedesco)

Without a boost from forest fire ash, warm summer temperatures couldn't have melted nearly all of Greenland's surface ice in 2012, a new study finds.

Soot from raging forest fires in Siberia and North America fell on Greenland's bright white snow and ice in the summer of 2012. Combined with record-high temperatures, the ash kicked the ice sheet's annual summer melt into overdrive, researchers report.

The massive melt in 2012 was the first time researchers saw stunning blue surface water ponds in the high altitudes of central and northern Greenland (up to 10,000 feet, or 3,100 meters, above sea level). Similar island-wide melting hit a handful of times in the past 1,000 years, ice layers show. [Video: 2 Extreme Melt Events 123 Years Apart]

Such island-wide melting, which once occurred only rarely, could become more frequent by the end of this century, Keegan said. Climate models predict forest fires will burn more often in the West, and Arctic temperatures will continue their rapid rise in coming decades. The ice sheet could undergo complete surface melting every year by 2100, the researchers estimate. The study was published today (May 19) in the Proceedings of the National Academy of Sciences.

"The middle of the ice sheet is now susceptible to melting, where previously it was not," Keegan told Live Science. "The Arctic is really changing."

In July 2012, more of the Greenland Ice Sheet's surface melted than ever seen since satellite tracking started, in 1979; some 97 percent melted.

Keegan and her co-authors were on the ice, collecting snow cores at the Greenland ice sheet's highest point, when 2012's sudden melt struck. The experience of seeing the summit covered in meltwater prompted the research team to search for possible causes, Keegan said.

"I actually experienced one as it was happening," she said.

Some of Greenland's ice melts every year, but the summer thaw is usually confined to the island's lower-elevation edges, near the coastline. While summer melt runoff can be intense at the coast, at high elevations, the water mostly refreezes into ice. In old snow layers, an ice layer is often a sign of past melt events. The scientists examined snow and ice from six cores at four spots across Greenland, and found that in the last 300 years, Greenland melted from coast to coast only when soot and sultry heat combined, the study reports.

In 1889, the same combination of unusual summer warmth and soot from blazing fires triggered a massive surface melt, the researchers found. But when summer temperatures were even warmer, in 1785, the snow didn't melt — and there was little ash that year. Soot levels also spiked in 1868 and 1908 — yet, again, the snow stayed frozen, because the air was too cool.

"The widespread melting of the Greenland ice sheet required the combination of both of these effects — lowered snow albedo [or its reflectivity] from ash and unusually warm temperatures — to push the ice sheet over the threshold," Keegan said.

Earlier research has examined the causes of 2012's record summer heat. Scientists found that a blanket-like layer of warm air and thin clouds insulated the island, boosting temperatures. The heat was funneled toward Greenland from North America by an atmospheric river, a narrow, fast-flowing current of moist, warm air, a separate study found.