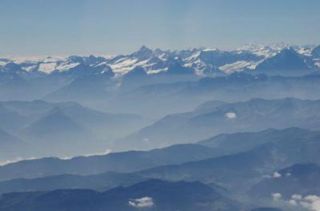 Mountain peaks in the Bernese Alps protrude above the top of a hazy layer of air. Scientists have found convincing evidence that, beginning in the 1860s, soot sent into the air by a rapidly industrializing Europe caused the abrupt retreat of mountain glaciers in the European Alps.
(Image: © Peter Holy)

Soot billowing across Western Europe during the Industrial Revolution may have caused the abrupt and unexpected retreat of European glaciers during a climatically cool period in the 19th century, new research suggests.

Mountain glaciers in the European Alps retreated by an average of nearly 0.6 miles (1 kilometer) between 1860 and 1930. This period falls at the end of Europe's so-called Little Ice Age, when temperatures dipped below average by about 1.8 degrees Fahrenheit (1 degree Celsius) across much of the continent.

Scientists have long struggled to identify a cause for this surprising retreat, but had been unable to find a suitable answer in the climate record. Now, researchers based at NASA's Jet Propulsion Laboratory in Pasadena, Calif., have honed in on the potential anthropogenic — or human-induced — causes of the retreat. The researchers focused on the potential impact of particulate carbon, or soot, on snow melt. Soot was a major form of pollution at the time of the melt, given the prevalence of coal burning in that era. [In Images: Tracking a Retreating Glacier]

When soot settles on snow in large enough quantities, it creates a dark, heat-absorbent film on the otherwise reflective white surface of the snow. This causes the surface to absorb significantly more heat than it otherwise would, which eventually thins the snow down to the glacial ice that sits below the surface layer, causing further retreat.

To examine whether this effect would have been strong enough to induce the abrupt glacial retreat in the European Alps, the team analyzed ice cores collected from several European mountain glaciers and measured the levels of soot in various ice layers. The researchers used these measurements to estimate the quantities of soot that would have settled on glaciers lower in the Alps during the Industrial Revolution, and then entered this data into a computer model of glacial behavior.

They found that the soot could, in fact, have had a strong enough effect to heat and melt the snow at the rate recorded.

"This study uncovers some likely human fingerprints on our changing environment," Waleed Abdalati, a researcher at the University of Colorado and an author on the paper, said in a statement. "It's a reminder that the actions we take have far-reaching impacts on the environment in which we live."

The research appeared in the Sept. 2 issue of the journal Proceedings of the National Academy of Sciences.