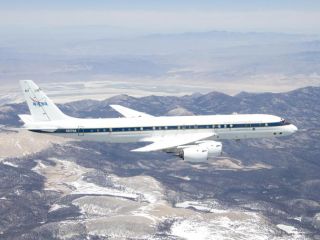 NASA's DC-8 flying laboratory will carry a team of scientists and their sensors for the SEAC4RS campaign. SEAC4RS will investigate how pollution and natural emissions affect atmospheric composition and climate.
(Image: © NASA/Lori Losey)

HOUSTON — In an attempt to better understand how air pollution and natural emissions of certain chemicals are distributed by storms and how that movement affects Earth's climate on a global scale, NASA has commenced its most complex airborne science study of the year, drawing together coordinated observations from the agency’s satellites, aircraft and ground sites.

The Studies of Emissions, Atmospheric Composition, Clouds and Climate Coupling by Regional Surveys mission — known as SEAC4RS — is currently underway at Ellington Field here near NASA’s Johnson Space Center. Flying laboratories built into an airliner, a business jet and a spy plane are providing new insights into the effects of the gases and tiny aerosol particles that are emitted into the atmosphere.

The SEAC4RS aircraft and sensors are probing the atmosphere from its top to bottom to see the effects across the atmosphere's various layers, and they're investigating at a time of the year when weather systems are strong enough and regional air pollution and natural emissions are prolific enough to pump gases and particles high into the stratosphere, according to a NASA statement. This movement of aerosols has potentially global consequences for Earth's atmosphere and climate.

"With SEAC4RS, we hope to better understand how all these things interact," said SEAC4RS lead scientist Brian Toon, of the University of Colorado, Boulder.

"In summertime across the United States, emissions from large seasonal fires, metropolitan areas and vegetation are moved upward by thunderstorms and the North American monsoon," Toon said. "When these chemicals get into the stratosphere, they can affect the whole Earth. They also may influence how thunderstorms behave." (The stratosphere is the second layer of the Earth's atmosphere, above the troposphere, where breathable air is found and whether weather occurs. The stratosphere is where the protective ozone layer is found.)

The measurements will help scientists like Toon tweak the models they use to predict how climate change might impact the planet.

"The measurements that we make and the improvements that we will make to our models will help give us a better predicative capability for air quality, atmospheric composition and climate," Hal Maring, SEAC4RS program scientist at NASA Headquarters in Washington, told reporters on Thursday (Aug. 22) during a media briefing.

The mission is targeting two major regional sources of summertime emissions, the NASA statement said: intense smoke from forest fires in the western United States and natural emissions of isoprene, a carbon compound, from forests in the Southeast. If it reaches higher levels of the atmosphere, isoprene can deplete ozone. [Video: What Can We Do About Ozone Loss?]

An Aug. 12 flight took the planes from the Gulf Coast of Louisiana to northern Georgia, looking at how isoprene and human emissions were affecting the atmosphere. In particular, the flights looked at a plume of pollution over Birmingham, Ala., and a thunderstorm cloud, according to a NASA release.

Forest fire smoke, particularly an issue in the West at this time of year, as can be seen in California's raging Rim Fire, can change the properties of clouds. The particles in the smoke can reflect and absorb incoming solar energy, potentially producing a net cooling at the ground and a warming of the atmosphere, NASA said in a release, which could alter the climate change budget. (The net effect of clouds in the climate change equation is uncertain already, with some potentially producing net cooling by reflecting the sun's rays, but others potentially causing warming but holding in the radiation emitted by the Earth's surface.)

"These particles in the air not only make asthmatics short of breath, but they also reflect light," Toon said. "So a large particle load in the atmosphere will actually reduce the amount of solar energy that gets from the sun down to the surface of the Earth, so climate effects for sure."

The SEAC4RS' campaign, which began on Aug. 6, is expected to run through September. The mission, which was five years in the making, will include a total of 18 coordinated aircraft flights.

In addition to collecting science data for study, the results of the SEAC4RS measurements may help validate satellite findings and approve instruments for future satellites.

The SEAC4RS campaign is supported in part by the U.S. Naval Research Laboratory.