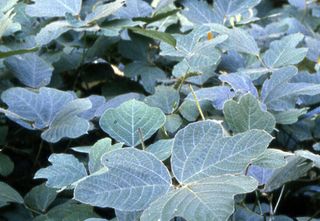 Kudzu (Pueraria montana) is a rapidly growing invasive vine species that was introduced in the Southeast in the 1930s as means to control soil erosion.
(Image: © Jonathan Hickman/PNAS)

The creeping, smothering vines of kudzu that have spread throughout the southeastern United States in recent decades could also contribute to ozone pollution in the region.

Kudzu (Pueraria montana) is a rapidly growing vine native to Asia that was introduced to the United States in 1876 at the Centennial Exposition in Philadelphia as an ornamental plant and later promoted to farmers in the Southeast as a means of controlling soil erosion by the U.S. Soil Conservation Service during the 1930s.

A widely-known pest plant in the Southeast, kudzu can grow at astonishing rates, climbing up trees and killing them by blocking out life-giving sunlight. The vine is partial to roadsides, old fields, the edges of forests and other open areas.

Kudzu now occupies more than 7.4 million acres in the United States and is expanding at a rate of more than 120,000 acres per year — it has even been found as far north as Ontario.

"Kudzu is really kind of the poster child for invasive species," said ecologist Jonathan Hickman of The Earth Institute at Columbia University in New York, who led the study into kudzu's potential impact on ozone pollution.

While ozone in higher layers of the Earth's atmosphere protects life on the planet's surface from the sun's harmful ultraviolet rays, ozone in the lower levels of the atmosphere is bad news because it can damage plants and irritate human lungs.

Ozone is a major component of the smog that clogs the air of many urban areas around the world.

Ozone is created in the lower portions of Earth's atmosphere by the reaction of sunlight with two kinds of chemicals in the air, hydrocarbons and nitrogen oxides.

Both of these chemicals are released by manmade processes, such as the combustion of fossil fuels in cars and industry, but they can also be released by plants. These biological sources of hydrocarbons, in particular one called isoprene, and nitrogen oxides are particularly important when it comes to generating smog in the Southeast.

Early efforts to address smog in Atlanta, Ga., by addressing manmade pollution of nitrogen oxides failed partly because so many plants in the area produced it, Hickman told LiveScience.

Hickman wondered whether kudzu — a type of legume that cooperates with soil bacteria to chemically alter nitrogen and  in the process gives off nitrogen oxides — could affect ozone production in areas where it had a strong presence.

To study the potential effect of kudzu on ozone pollution, Hickman and his colleagues set out to a site in Madison County, Ga.

They took those measurements of increased nitrogen oxide and plugged them into a model that projects regional air quality to see how those increased emissions could affect ozone production.

The model estimated that an extensive kudzu invasion could lead directly to an increase in the number of days with high ozone levels, adding up to seven days of high ozone alerts during the summer to a range of 10 to 20 such days when there was no kudzu.

Hickman cautioned that the study is based on only a small number of nitrogen oxide measurements and a fairly extreme model scenario, and he doesn't think that kudzu now is increasing the number of high ozone days in the Southeast.

Hickman sees the study results, detailed in the May 17 issue of the journal Proceedings of the National Academy of Sciences, as a clear indicator that the impacts of invasive species on the atmosphere need to be considered along with their effects on ecosystems.

"If you didn't already have enough reason to control kudzu, here's one more" he said. "There's no reason why we should have kudzu here in the first place."