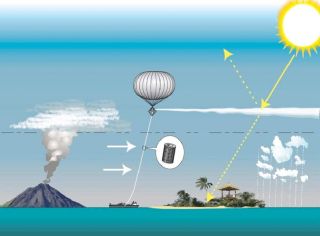 A British climate-cooling balloon experiment would have sprayed water into the atmosphere to test its effect on reflecting sunlight.
(Image: © Hugh Hunt, SPICE project)

Heat waves. Drought. Storms. The extreme weather that has battered much of the planet in the past few years, up through the heat wave cooking most of the United States this summer, has more scientists thinking about extreme solutions to the climate crisis.

Geoengineering – making large-scale changes to the environment – is no longer fringe science, with the debate shifting from whether it should be done to how.

One controversial idea gaining traction among scientists is injecting small particles, known as aerosols, into the stratosphere to block the sun's radiation.

Aerosols reflect solar radiation back into space, lowering Earth surface temperatures. They can also provide "seeds" around which water droplets coalesce to form clouds, thus further increasing the planet's reflectivity. The particles are fairly long-lived in the stratosphere, a stable region of the atmosphere that begins five to six miles up. This makes the idea of aerosols' use as a worldwide planet-cooler fairly attractive.

The effects of aerosol injections are at least somewhat known, since volcanic eruptions produce aerosols naturally and have produced cooling in the past. Mount Pinatubo, a volcano in the Philippines that erupted in 1991, spewed so much sulfur dioxide into the stratosphere that the planet cooled by 1 degree Fahrenheit (0.55 degrees Celsius) and stayed cool for more than two years.

Skeptics of the idea, however, say it's one thing when a volcano erupts; imitating nature would be another thing entirely. While Pinatubo-like amounts of sulfur (roughly 20 million tons) pumped into the atmosphere could linger three to four years, cooling the planet within the first months, reversing sea ice melt, and possibly even promoting tree growth, the side effects are uncertain. A 2009 paper found that stratospheric aerosol injection (SAI) could lead to drought in Africa and Asia and deplete the ozone layer, and it would not stop ocean acidification.

A miscalculation in the injections could be a costly mistake, ushering in a new ice age. And if scientists were to stop regular injections without cleaning up the greenhouse gases in the atmosphere, the rebound effect could be worse for crops, animals and ecosystems than if they had done nothing. [Could Space Mirrors Stop Global Warming?]

Beyond that, critics say, regular aerosol injections would change the sky's color, ruin astronomy for optical telescopes on Earth, and remove the incentive for nations to clean up their own acts. And in a final act of irony, with less sunlight reaching the Earth's surface, solar panels would produce less power.

Despite these potential drawbacks, research continues. A group of Cambridge scientists recently published a study of the proposed options for getting the aerosols to the stratosphere. (The report favored using a large tethered balloon with a hose attached to a high-pressure pump.) A study in mid-2012 found that the sky would look no different post-geoengineering than it currently does in urban areas, which have higher levels of aerosols due to pollution. And many scientists have concluded that aerosol injection is the most effective, most timely and cheapest solution to warming that has been proposed thus far, costing about $50 billion per year.

However, until scientists know more about the potential side effects of geoengineering through tests (as opposed to computer models), it's not likely to happen. A 2010 government report found only one field experiment related to aerosols and noted that the U.S. spent only about $2 million over two years investigating solar radiation management techniques.

The problem? Testing large-scale climate engineering techniques in the field requires large-scale tests in the field. In the words of climate change scientist Mike Hulme, writing in Progress in Physical Geography: "Research and deployment become one and the same." To test the technology, it has to be put into effect  –  and the consequences of that are still largely unknown.