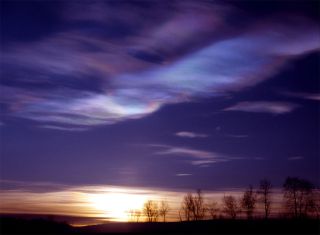 It is a little-known, but significant, fact that about 70 percent of the Earth's surface is covered by clouds at any given time. But, not all clouds are the same; different types of clouds affect the Earth's climate differently. While some types of clouds help to warm the Earth, others help to cool it.

Right now, "the scientific community is uncertain about how the effects of clouds will change in the future," says Hugh Morrison, a scientist at the National Center for Atmospheric Research in Boulder, Colo.

One of two ways

This would moderate, or offset, ongoing warming. The result: The Earth's end-of-the-century temperature may be pulled down toward the lower end of its predicted range.

But if, on the other hand, warming were to increase warming clouds or decrease cooling clouds, scientists say the current net cooling effect of clouds on the Earth's climate would probably decrease, and an important moderating force on ongoing warming would thereby diminish. The result: The Earth's end-of-the-century temperature may be pushed up toward the upper end of its predicted range.

The resulting rise in temperature would, in a positive feedback loop, tend to promote the formation of even more warming clouds or further reduce the presence of cooling clouds.

Either way, temperatures would rise even higher.

This dual role of clouds is why, in 1997, the Intergovernmental Panel on Climate Change (IPCC) described clouds as "the largest source of uncertainty" in predictions of climate change.

To reduce this uncertainty and improve predictions of climate change and global warming, scientists are now working to better understand the relationships between clouds and climate.

For more on clouds and climate change, and to see a video on cloud research, visit NSF’s special report at http://www.nsf.gov/news/special_reports/clouds/.

Any opinions, findings, and conclusions or recommendations expressed in this material are those of the author and do not necessarily reflect the views of the National Science Foundation.  See the Research in Action archive.