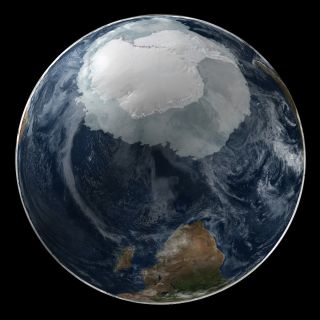 Antarctica is rising unusually quickly, revealing that hot rock in the Earth's mantle hundreds of miles below the icy continent is flowing much faster than expected, researchers say.

Antarctic ice is more than 2.6 miles (4.2 kilometers) thick on some parts of the continent, a reminder that glaciers that were miles thick once covered many parts of Earth's surface. When these ice sheets shrink, as is happening now in the world's polar regions due to climate change, the underlying Earth rebounds upward, like how mattresses typically decompress after people get off them.

Past research suggested this rebound involved very slow uplift of the Earth's surface over thousands of years. However, an international research team now reveals that at GPS stations on the Northern Antarctic Peninsula, the land is actually surging upward at the rate of up to 0.59 inches (15 millimeters) a year. [Vanishing Glaciers: Stunning Images of Earth's Melting Ice]

Furthermore, "closer to the site of the ice loss — that is, right next to the thinning glaciers where we do not have any GPS sites — the Earth is likely to be rebounding significantly more than 15 millimeters [0.59 inches] per year," lead study author Grace Nield, a geophysicist at Newcastle University in England, told Live Science."As much as 47 millimeters [1.85 inches] per year has been predicted from our models."

The usual models of the Earth cannot account for this much uplift.

"You would expect this rebound to happen over thousands of years, and instead we have been able to measure it in just over a decade," Nield said in a statement. "You can almost see it happening, which is just incredible."

Since 1995, several ice shelves in the Northern Antarctic Peninsula have collapsed, causing the solid Earth to bounce back.

"Think of it a bit like a stretched piece of elastic," Nield said. "The ice is pressing down on the Earth, and as this weight reduces, the crust bounces back."

The scientists analyzed data from seven GPS stations situated across the Northern Antarctic Peninsula to see how the Earth's surface was moving.

"What we found when we compared the ice loss to the uplift was that they didn't tally," Nield said. "Something else had to be happening to be pushing the solid Earth up at such a phenomenal rate."

Flow in the mantle

The researchers suggest that characteristics of the Earth's mantle layer — the region of the planet directly below the Earth's crust — can explain why this rebound is happening so quickly. Specifically, 250 miles (400 km) below the Northern Antarctic Peninsula, the upper part of the mantle is at least 10 times less resistant to flow than previously thought, and much less resistant to flow than the rest of Antarctica.

"Because the mantle is 'runnier' below the Northern Antarctic Peninsula, it responds much more quickly to what's happening on the surface," Nield said. "So as the glaciers thin and the load in that localized area reduces, the mantle pushes up the crust."

The mantle under the Northern Antarctic Peninsula may be comparatively runny due to subtle differences in temperature or chemical composition, the researchers say. This means the region is less viscous, so it flows more easily.

"The mantle is flowing so fast that we can observe it in just a few years," Nield said.

A question scientists might ask "is whether the uplift recorded by the GPS stations could be caused by something other than ice loss," Nield said. "This is unlikely, as prior to ice-shelf collapse and ice unloading, the GPS records show almost no uplift at all."

The next step is to look at the horizontal motions caused by the shrinking of the ice sheet to get more of a 3D picture of how the Earth is deforming, Nield said.

"In theory, the Earth should not only be moving up, but also away from the location of the ice loss. Examining horizontal deformation can therefore verify the results we have," Nield said. "Additional GPS stations can also help to refine the results, and several such stations have recently been installed in this region of Antarctica."

The scientists detailed their findings online May 12 in the journal Earth and Planetary Science Letters.