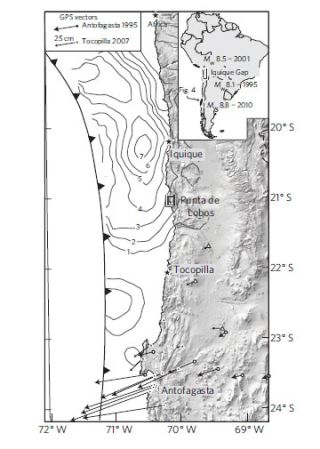 A map of an the area in Chile where scientists examined signs that millenia of earthquakes had left permanent deformation of the ground.
(Image: © A. Baker, et al./Nature Geoscience)

Earthquakes can permanently crack the Earth, an investigation of quakes that have rocked Chile over the past million years suggests.

Although earthquakes can wreak havoc on the planet's surface, more than a century of research has suggested the Earth actually mostly rebounds after quakes, with blocks of the world's crust elastically springing back, over the course of months to decades, to the way they initially were. Such rebounding was first seen after investigations of the devastating 1906 San Francisco temblor thathelped lead to the destruction of more than 80 percent of the city. The rebound is well-documented nowadays by satellite-based GPS systems that monitor Earth's movements.

However, structural geologist Richard Allmendinger of Cornell University and his colleagues now find major earthquakes of magnitude 7 or greater apparently caused the crust in northern Chile to crack permanently. [The 10 Biggest Earthquakes in History]

"My graduate students and I originally went to northern Chile to study other features," Allmendinger said. "While we were there, our Chilean colleague, Professor Gabriel González of the Universidad Católica del Norte, took us to a region where these cracks were particularly well-exposed."

"I still remember feeling blown away — never seen anything like them in my 40 years as a geologist — and also perplexed," Allmendinger told OurAmazingPlanet. "What were these features and how did they form? Scientists hate leaving things like this unexplained, so it kept bouncing around in my mind."

In northern Chile, "the driest place on Earth, we have a virtually unique record of great earthquakes going back a million years," Allmendinger said. Whereas most analyses of ancient earthquakes only probe cycles of two to four quakes, "our record of upper plate cracking spans thousands of earthquake cycles," he noted.

The record of the vast number of earthquakes captured in northern Chilean rocks allowed the researchers to examine their average behavior over a much longer period of time, which makes it easier to pick out any patterns. They discovered that a small but significant 1 to 10 percent of the deformation of the Earth caused by 2,000 to 9,000 major quakes over the past 800,000 to 1 million years was permanent, involving cracks millimeters to meters large in the crust of the Atacama Desert. The crust may behave less elastically than previously thought.

"It is only in a place like the Atacama Desert that these cracks can be observed — in all other places, surface processes erase them within days or weeks of their formation, but in the Atacama, they are preserved for millions of years," Allmendinger said. "We have every reason to believe that our results would be applicable to other areas, but is simply not preserved for study the way that it is in the Atacama Desert," he added.

This work "calls into question the details of models that geophysicists who study the earthquake cycle use," Allmendinger said. "Their models generally assume that all of the upper-plate deformation related to the earthquake cycle is elastic — recoverable, like an elastic band — and not permanent. If some of the deformation is permanent, then the models will have to be rethought and more complicated material behaviors used.

The scientists detailed their findings online April 28 in the journal Nature Geoscience.