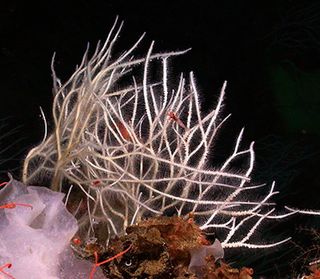 A close-up view of Asbestopluma monticola, one of four new species of carnivorous sponges discovered off the West Coast of North America.
(Image: © MBARI)

They don't have gaping maws or fearsome talons. But don't be fooled. These sponges — though they look like fuzzy twigs — are killers.

Four new species of carnivorous sponges that prey on shrimplike amphipods and other small animals were discovered in deep waters off the Pacific coast of North America, scientists announced.

Most sponges are filter feeders. They use specialized cells called choanocytes, which have tiny, beating tails that help pull in bacteria and single-celled organisms from the surrounding water. But carnivorous sponges lack these water-moving cells. Instead, they've developed a different strategy to snare food. [In Photos: Spooky Deep-Sea Creatures]

"To keep beating the whiplike tails of the choanocytes takes a lot of energy," study author Lonny Lundsten, a biologist with the Monterey Bay Aquarium Research Institute, said in a statement. "And food is hard to come by in the deep sea. So these sponges trap larger, more nutrient-dense organisms, like crustaceans, using beautiful and intricate microscopic hooks."

Within a few hours, a carnivorous sponge will start digesting the prey in its clutches. Eventually, all that's left is an empty shell.

Lundsten and colleagues discovered four meat-eating sponges with the help of underwater remote-operated vehicles (ROVs) that video-recorded the sponges and plucked samples from the seafloor with a robotic arm.

One species, Asbestopluma monticola, was first collected in 2006 at the top of Davidson Seamount, an ancient underwater volcano off the coast of California. It was living among a community of corals, sponges and echinoderms (a family that includes starfish and sand dollars). The scientists even found crustaceans in various stages of decomposition caught in the creatures' ethereal filaments.

The three other new species were all found in extreme chemosynthetic habitats with little light and sparse oxygen. Whereas photosynthesis harnesses energy from the sun to create organic matter, chemosynthesis is a process by which energy from the oxidation of molecules like methane converts inorganic compounds like hydrogen sulfide into life-supporting organic matter.

Another new species, Asbestopluma rickettsi, was found off the coast of Southern California living near colonies of clams and tubeworms that use methane-oxidizing bacteria to obtain nutrition from natural gas seeping out of the seafloor. A third sponge, Cladorhiza caillieti, was found on lava flows along the volcanic Juan de Fuca Ridge, off Vancouver Island, the scientists said. The fourth, Cladorhiza evae, was discovered at a hydrothermal vent field along the Alarcon Rise, off Baja California.

Scientists didn't discover meat-eating sponges until just 20 years ago. The new species join just seven other types of carnivorous sponges that have been found so far in the Northeast Pacific, including a bizarre species that looks like a harp.

The four sponges were described April 9 in the journal Zootaxa.