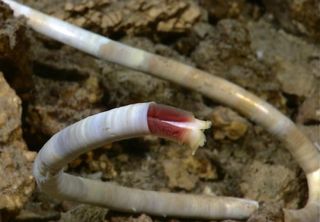 An expedition to explore the bottom of the sea has glimpsed tube worms living near hydrothermal vents, the first time the bizarre creatures have been seen in the Atlantic Ocean.

"I will take that home as my personal key discovery moment for the cruise," said expedition science lead Chris German, chief scientist for the National Deep Submergence Facility at the Woods Hole Oceanographic Institution in Massachusetts, in a statement.

The expedition team used remotely operated vehicles, or ROVs, last month to spy on life near the Mid-Cayman Rise, a region at the bottom of the Caribbean Sea south of Grand Cayman Island where tectonic forces are pulling the seafloor apart.

Adding to the excitement, the worms were seen living alongside a species of deep-sea shrimp. Until now, the two species had never been seen living together at a hydrothermal vent— an opening on the seafloor that spews forth hot water and minerals from deep inside the Earth.

"The significance of these observations is that the iconic symbol of Pacific vents is the tube worm, while the iconic symbol of Atlantic vents is the vent shrimp," said Paul Tyler, a marine biologist from the University of Southampton in the United Kingdom who was aboard the National Oceanic and Atmospheric Administration's research vessel Okeanos Explorer that investigated the vents.

"To find both together has important implications for the evolution of vent communities in the Caribbean as the Atlantic became separated from the Pacific some 5 million years ago," Tyler said.

The vents were recently discovered to host species such as the tube worms and shrimp that pass their lives in the total darkness of the seafloor. Unlike most species on the planet, the extreme creatures live independently of energy from sunlight and derive all their sustenance from chemicals spit out by the vents they call home.

Tube worms rising 6 feet (1.8 meters) from the seafloor were first discovered in 1977 next to hydrothermal vents in Pacific waters at the Galapagos near where the underwater tectonic plates spread. Since then, smaller tube worms have been found at seafloor cold seeps in the Gulf of Mexico, but until this discovery, they had not been observed at vents in the Atlantic.