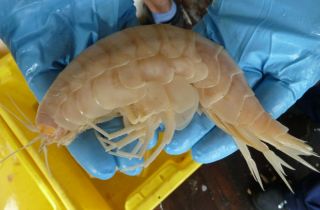 Scientists on an expedition to sample a deep-sea trench got a surprise when their traps brought back seven giant crustaceans glimpsed only a handful of times in human history.

The "supergiant" amphipods are more than 20 times larger than their typical crustacean relatives, which are generally less than a half-inch (1 centimeter) long, and thrive in lakes and oceans around the world. They are sometimes called the "insects of the sea."

"We pulled up the trap, and lying among the fish were these absolutely massive amphipods, and there was no inkling whatsoever that these things should be there," said Alan Jamieson, a lecturer at the University of Aberdeen in Scotland, and leader of the expedition that turned up the fantastical creatures in November 2011.

The largest of the seven specimens was about 11 inches (28 cm) long.

"They actually don't feel real," Jamieson told OurAmazingPlanet. "They feel like plastic toys. They have a waxy texture to them." [See image of the supergiant crustacean.]

The pale, leggy creatures were found 4 miles (6 kilometers) down in the Kermadec Trench, off the northeast coast of New Zealand, one of the deepest trenches on Earth.

In addition to the animals captured in the trap, a seafloor camera more than a mile (2 km) away spied at least nine supergiant amphipods. It's not clear why so many of the typically elusive creatures were in the area. A week later, when the expedition returned to the same spot, there was no sign of the supergiant amphipods, which was "very, very strange," Jamieson said.

It appears the Aberdeen expedition has retrieved the largest complete specimen ever collected. (In 1983, an albatross regurgitated a supergiant amphipod, that, not surprisingly, was in poor shape. Researchers estimated at the time that, when alive, the creature would have been 13 inches (34 cm) long.)

Supergiant amphipods (Alicella gigantea) were first discovered in 1899, when a trawling expedition turned up two specimens from the Atlantic Ocean. The species wasn't seen again for nearly 100 years. In the 1970s, scientists photographed the oversized creatures in the northern Pacific Ocean, hundreds of miles north of Hawaii.

Then in the 1980s, scientists managed to bring back a few specimens of the giant crustaceans from the same area.

"Nobody has ever really mentioned them since," Jamieson said. "They're one of these strange deep-sea anomalies."

Although the amphipod find was exciting, the expedition's true quarry was a deep-sea snailfish that has only been sampled once before, in 1952.

"Nobody has ever caught one since," Jamieson said. Yet in among the weird amphipods? Seven snailfish.

"To do what we wanted to do we really just needed one fish, so to get seven fish was amazing — and to get seven supergiants is incredible," Jamieson said.

"It was a pretty good day, let's put it that way," he added.

The scientists are mounting a return sampling expedition to the same swath of deep sea off the coast of New Zealand in a week.