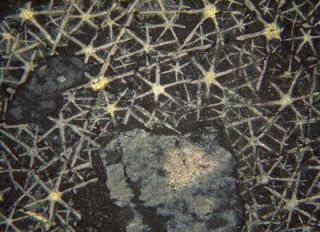 You may owe your life to the lowly sea sponge.

Flourishing in extreme, deep-ocean environments hundreds of millions of years ago, sponges may have helped produce the oxygen requisite for the explosion of more complex life forms on Earth, a new study suggests.

"The effects we predict suggest that the first animals, far from being a passive response to rising atmospheric oxygen, were the active agents that oxygenated the ocean around 600 million years ago," study author Tim Lenton, a professor at the University of Exeter, said in a statement. "They created a world in which more complex animals could evolve, including our very distant ancestors." [Cambrian Creatures: Primitive Sea Life]

Sponges are the first animals to have evolved on Earth, and they don't need much oxygen to survive. In fact, a recent study in the journal Proceedings of the National Academy of Sciences showed that a Halichondria panicea sponge found in Danish waters would thrive even when the oxygen levels dip to 0.5 percent of present-day atmospheric levels.

Sponges do, however, contribute to the amount of oxygen in the ocean because of the way they feed, thus Lenton and colleagues say it's possible that these creatures could have played a key role in the oxygenation of the deep oceans. The findings, published March 9 in the journal Nature Geoscience, challenge the notion that the emergence of animals was dependent on a significant rise in oxygen in the atmosphere, the researchers say.

Sponges don't have guts. Instead, they eat by filtering water through their bodies and taking out organic matter from the water column. This feeding process puts more oxygen back into the environment.

Sponges may have helped put even more oxygen into the oceans in an indirect way, the researchers say. As sponges put oxygen back into the water, less phosphorous — a key biological nutrient — could be released in the ocean. This would have lowered overall biological productivity and freed up even more oxygen in the water, creating a feedback loop.

This new abundance of oxygen may have provided fledgling animals the extra power to gain greater mobility and evolve complex body forms like guts during the Cambrian explosion, the period about a half a billion years ago that saw a burst of evolutionary changes in life on Earth. These developments gave rise to the first carnivores and marked beginning of the marine biosphere that looks familiar today.