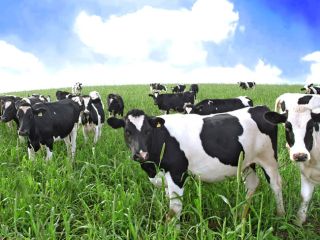 A cow that produces low-fat milk was discovered a few years back. That cow, Marge, has now passed on her mutant abilities to her daughters, a good sign for researchers hoping to someday breed skim-milk cows. But to get more of where that came from, more cows may be needed since thereÃ¢â‚¬â„¢s likelihood that cows like Marge would produce less milk.

In a few years, skim milk may come straight from the cow, it was reported this week.

Skim milk is usually produced by taking all of the fat out of regular milk, but in 2001, researchers found a cow that skipped that step. While screening a herd of cows, they found one with a natural gene mutation that makes her produce lower-fat milk than a normal cow.

Marge, as researchers later named her, makes milk that has 1 percent fat (as compared to 3.5 percent in whole milk) and is high in omega-3 fatty acids. And remarkably, Marge’s low-fat milk still has the same delicious taste as conventionally produced low-fat milk, according to the report in Chemistry & Industry magazine.

The low saturated fat content of Marge’s milk also means that butter made from it is spreadable right out of the fridge, while most butter has to come to room temperature before it can be spread on toast.

After researchers found that Marge’s daughters also produced low-fat milk, they surmised that the genetic trait was dominant and planned to breed herds of skim milk-producing cows. (Marge and her offspring live in New Zealand.)

ViaLactia, the company that owns Marge, expects the first commercial herd of cows supplying natural low-fat milk and spreadable butter for the market by 2011.

But because cows are normally selected for breeding because they give a high milk yield, this new selection criteria could mean the skim milk cows would produce less milk, said Ed Komorowski, technical director at Dairy UK and who is not affiliated with the research—so more cows could be needed to produce the same amount of milk.

And “normal” cows wouldn’t disappear, he told LiveScience, as their milk would still be needed to make fattier products such as cream.

The Associated Press contributed to this report.