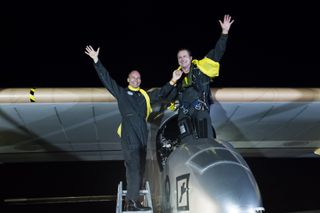 The two Swiss pilots who flew a solar-powered plane on a record-setting coast-to-coast flight across the United States last summer will unveil their next-generation solar plane this week, which they will use in 2015 to circumnavigate the globe.

Pilots André Borschberg and Bertrand Piccard are slated to reveal a new solar-powered airplane, dubbed Solar Impulse 2, in a ceremony tomorrow (April 9), beginning at 9 a.m. EDT (3 p.m. local time in Switzerland). The event will be webcast live on the Solar Impulse website.

Last year, Borschberg and Piccard alternated flying a different solar-powered plane, called Solar Impulse, from California to New York, completing the cross-country journey on July 6, 2013, after roughly two months and five planned stops. The pilots are planning to fly the new Solar Impulse 2 plane on a first-of-its-kind journey around the world. [Images: Cross-Country Flight in a Solar-Powered Plane]

"After years of design, complex simulations and test flights with the first prototype, Solar Impulse 2 will be presented to our partners, friends and media before undertaking, in 2015, the ultimate technological and symbolic adventure of flying around the world without fuel, only powered by the sun," Solar Impulse officials said in a statement.

The Solar Impulse plane is the first aircraft capable of flying day and night without fuel. The ultra-lightweight plane is powered entirely by solar panels and onboard batteries, which charge during the day to allow the plane to fly when the sun goes down. The initiative is designed to demonstrate the possibilities for sustainable energy.

The Solar Impulse 2 has a wingspan that stretches 236 feet (72 meters), and is covered in 17,000 solar cells, according to company officials. The new carbon-fiber plane also features a larger cockpit, which should enable the pilots to fly for longer periods of time.

Solar Impulse 2 will undergo a series of flight tests this spring, and the pilots are aiming to begin their round-the-world expedition next year, between April and July, company officials said.

Before flying across the United States, the Solar Impulse plane successfully completed a 26-hour overnight flight in 2010. The plane also flew from Switzerland to Morocco in 2012.