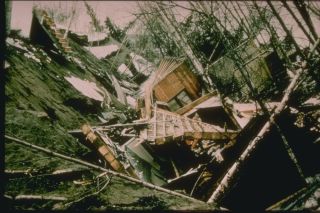 There were great horrors, but what many children remember is missing their supper.

The earthquake struck at 5:36 p.m. Alaska Standard Time on Good Friday. When the first shaking hit, many parents were in the kitchen, fixing dinner. For more than 4 minutes, the earth buckled and lurched all across southern Alaska. Few people returned home to their meals that night. In Anchorage, the ground cracked open and giant fissures swallowed children whole, killing them in front of their siblings. Landslides launched tsunamis that swept away coastal villages before the shaking even ended. In Seward, spilled oil slicked the water and caught fire. When the earthquake-triggered tsunami hit minutes later, the wave was blazing. "It was an eerie thing to see — a huge tide of fire washing ashore," survivor Gene Kirkpatrick told National Geographic magazine in 1964.

In 50 years, no earthquake since has matched the power of the March 27, 1964, Great Alaska earthquake. Now ranked a magnitude 9.2, the second-largest ever recorded, the earthquake radically transformed the young state. Important coastal ports, roads and rail lines were destroyed. The liquefied ground in Anchorage led to the country's strictest seismic building codes (now outpaced by California). President Lyndon Johnson ordered a comprehensive scientific study of the earthquake. [See Photos of the 1964 Great Alaska Earthquake]

The geologic discoveries transformed how we understand the Earth.

"In 1964, earth scientists were swept away by the plate tectonic revolution, which changed everything we know about how the earth works," said Ross Stein, a U.S. Geological Survey geophysicist. "That insight was triggered by the Great Alaska earthquake 50 years ago."

In the 1960s, geologists thought straight up-and-down (vertical) faults bounded the edge of continents, similar to the San Andreas Fault that slices through California. In 1965, Frank Press, who would become science adviser to four presidents and head of Caltech's Seismological Laboratory, said a vertical fault extending from 9 to 125 miles (15 to 200 kilometers) deep caused the Great Alaska earthquake. His model was published May 15, 1965, in the Journal of Geophysical Research. One month later, USGS geologist George Plafker proved him wrong.

As a USGS geologist, Plafker had studied Alaska's geology each summer since 1953. But he was in Seattle when the 1964 earthquake struck. After Plafker heard the Space Needle had swayed as the seismic waves raced past, he called his boss in Menlo Park, Calif., recommending an immediate response. Any earthquake big enough to shake the Space Needle from Alaska must be of interest to the USGS, he said. [Video: The 1964 Great Alaska Earthquake]

"I suggested we get up there fast before everything was bulldozed flat by the engineers," Plafker said.

Plafker's work on the 1964 earthquake solved a key piece of the plate tectonic puzzle: How oceanic plates recycle themselves at collision belts called subduction zones. At a subduction zone, one plate curves beneath another plate and sinks into the mantle, the hotter layer beneath the crust.

"Before the 1964 earthquake, we did not have a unifying theory of how the earth works," said Peter Hauessler, a USGS research geologist. "The 1964 earthquake was the first time people understood that there were places called subduction zones that produce these really enormous earthquakes."

Plate tectonics is now a widely accepted model that explains everything from why earthquakes happen to how mountains grow. The model says that Earth's surface is divided into stiff slabs of crust called plates. The oceanic plates are born and grow at mid-ocean ridges, the long underwater volcanic chains that wind around the Earth like seams on a baseball. Evidence for this growth was first published in 1963 — progressively older magnetic stripes on the seafloor record spreading away from the volcanic ridges.

But in 1964, geologists believed the Pacific Plate was rotating counter-clockwise. In that scenario, no new crust was created at underwater volcanic ridges, nor was old crust shoved under continents at subduction zones. (The counter-clockwise rotation was a concept created to explain the hundreds of miles of offset recently discovered along the San Andreas Fault.) However, this model didn't explain a strange observation: Where some plates meet, earthquakes deepen, defining a gently-dipping plane.

The careful geologic mapping led by Plafker in the summer of 1964 would be key to solving the mystery of oceanic plates sliding around Earth's surface, Stein said.

"George discovered they were shoved underneath the continents. He solved this incredible puzzle that triggered an understanding of what happens to the Pacific Plate as it subducts."

Beneath southern Alaska, the Pacific Plate dives underneath the North American plate, grinding northwest at a rate of 2.3 inches (5.8 centimeters)

per year. Friction between the two plates makes them lock together. Even though they're locked, the plates keep moving, compressing the crust like springs. Where the plates lock, they buckle and warp, similar to a piece of carpet wrinkling at one end.  Because of this compression, some areas of the Alaska coastline warped downward before the earthquake and others bulged upward.

During the 1964 earthquake, giant sections of coastline rose or fell as each plate relaxed and released the centuries of compression. The rupture was like unpeeling a piece of Velcro, with a segment of the subduction zone 580 miles long (930 km) by 100 miles (160 km) long shuddering apart at more than 100 miles an hour (160 km/h).

Pfalker and his colleagues surveyed the uplift and sinking after the 1964 earthquake. Areas around Montague Island rose 13 to 30 feet (4 to 9 meters) and Portage dropped 8 feet (2 m). Overall, the Pacific Plate slid under North America by about 30 feet (9 m). Like bathtub rings, the boosted-up islands showed the vertical changes. Masses of dead barnacles and starfish proved the land had just been underwater.

Plafker concluded the pattern could only have been caused by a hidden fault, releasing tension about 9 miles (15 km) below the surface. They never found a significant surface break from a vertical fault, just minor cracks from secondary faults. The results were published in the journal Science on June 25, 1965.

"If you do the things right, you can reveal some of nature's secrets," Plafker said.

Aftershocks also confirmed the findings. Following the massive megathrust in March, small earthquakes jangled the sinking plate all along its length. Detecting these quakes with seismometers showed the Pacific Plate bent beneath the North American Plate. (Before March 1964, Alaska had only two of the earthquake-sensing instruments — one in Fairbanks and one in Sitka. A bigger network was installed after the quake.)

And with hindsight, researchers can inspect the seismic record of the 1964 earthquake and see the pattern of a subduction zone earthquake hidden in the needle scratches. The pattern suggests one block thrusting over another, not the up-and-down motion of a vertical fault.

After the coastline sank, trees began dying as saltwater and silt invaded their roots, creating ghost forests still visible today. Decades later, these Alaska ghost forests were the clue to figuring out that the Cascadia subduction zone offshore of Washington also had a magnitude-9 megathrust earthquake in 1700.

"The 1964 earthquake gave birth to modern megathrust earthquake detection," Haussler said. "The patterns have now been recognized in many other regions."

The raised islands and tree graveyards along Alaska's coast suggest that megathrust earthquakes similar to the 1964 temblor happen sometime between every 330 and 900 years. But geologists are more concerned about the hazards Alaskans face from more frequent, smaller quakes along the Aleutian subduction zone, between magnitude 7 and magnitude 8.

"After the 1964 earthquake there was a visceral understanding of the hazards we faced, and I think we've lost a little bit of that edge," he said.

In Anchorage, wet, silty soils liquefied and a massive landslide destroyed 75 homes in 1964. Now known as Earthquake Park, the Turnagain Heights landslide is where children and homes were swallowed in the fissured ground. Some of the city's most expensive houses slid into the ocean atop liquefied soils. Yet people were allowed to rebuild along the bluff.

Saturated soil can be stiff when it's still, holding up houses and buildings. But when it shakes, the soil jiggles like gelatin and behaves like a liquid. Two-thirds of Alaska's population lives on top of these mixes.

Since the 1964 earthquake, geologists have learned that the speed of earthquake shaking plays an important role in destruction due to liquefaction. The shaking in 1964 was long and slow, instead of the fast, high-frequency shaking similar to Christchurch, New Zealand, which killed 185 people with a magnitude-6.1 quake in 2011. Christchurch and Alaska share similar mixes of unconsolidated sediments, West said.

The earthquake also proved the link between subduction zone earthquakes and tsunamis. The movement of the seafloor during the earthquake shoves the sea, giving it a big slap that translates into a massive tidal wave.

For an earthquake and tsunami larger than any in the past decade, the death toll was remarkably low, just 131 people. Throughout the southeast, the worst damage wasn't from ground shaking, but from soil failure, tsunamis and landslides.  The state had few residents, and they lived in low-rise wood-frame buildings, the most resistant to shaking. [11 Facts About The 1964 Alaska Earthquake]

Of the 119 deaths attributable to ocean waves, about one-third were due to the open-ocean tsunami: four at Newport Beach, Ore.; 12 at Crescent City, Calif.; and about 21 in Alaska. The most terrible damage was from tsunamis triggered by underwater landslides, as thick piles of sediment slumped and slid during the earthquake. In some cases, these waves hit before the earthquake ended, sweeping away entire villages. Eighty-two

people were killed by these "local waves."

"The victims in Seward, Chenega, Valdez and Whittier barely had a chance. The tsunami washed over them in a matter of seconds," West said.

In Seward, the tsunami inundation zone, where water destroyed the town and docks, was turned into a park and public campground. But new development has crept into the flood zone in recent years, prompting debate over safety and tsunami hazards.

In the past 50 years, Alaskans have endured scores of powerful earthquakes that would have devastated other states, such as a magnitude 7.9 earthquake in 2002 and a 7.5 shaker in 2012.

"If you’re not careful, the take-home message is that these big earthquakes don't hurt anyone in Alaska," West said. "That’s tremendously naive."