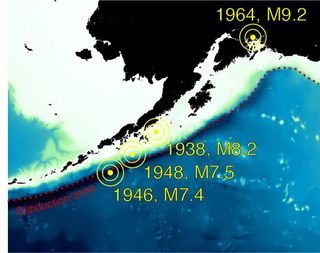 Off the coast of Alaska, a research team is working to map and better understand an earthquake fault that unleashed the deadly Good Friday temblor in 1964 and is still a threat to the region.

Similar to the recent quake in Japan , the 1964 earthquake rocked southern Alaska, toppling buildings and triggering landslides and tsunamis that killed 128 people. That magnitude 9.2 quake is the second-largest quake ever recorded.

The research mission aims to unlock the secrets of the fault that unleashed this quake so they can predict when another one might occur.

The 1964 Good Friday earthquake came from a rapidly moving undersea subduction zone spanning 1,500 miles (2,500 kilometers) from Alaska to Russia. Subduction zones are the boundaries where two tectonic plates converge and one plate is thrust beneath the other. This movement creates earthquakes and volcanoes that affect millions of people around the world. The zone that the mission is studying is called the Alaska-Aleutian subduction zone, part of the so-called Pacific Ring of Fire.

Seismologists aboard the seismic research vessel Marcus G. Langseth will are creating images of the fault to understand its potential for other giant quakes and tsunamis. The cruise will concentrate on an area that last ruptured in 1938 now believed to be well along in the cycle of building up enough strain to culminate in another dangerous quake. Earthquakes strike in this region about every 50 to 75 years.

The scientists will use sound waves to essentially make a sonogram of the fault. The ship tows an array of air guns that send sound waves down through the earth and back again. A variety of very sensitive instruments record the returning sound waves. These instruments include two 5-mile-long (8 km) cables filled with pressure sensors that are also towed behind the ship, seismometers placed on the seafloor and seismometers onshore around the Alaska Peninsula.

The mission team members have finished blasting the air guns, and recently re-tried their underwater seismometers, which is a suspenseful moment for the crew. The sensors could have imploded, failed, stuck to the seafloor or been dragged away by trawlers, destroying valuable data.

"All of these thoughts ran through my mind at each site as we waited for the instrument to come to the surface," team member Donna Shillington, of the Lamont-Doherty Earth Observatory, wrote on the mission's blog.

Luckily, the team was able to recover all of their instruments and have begun to study the data, Shillington reported. The seismologists will use the data to estimate the size of the fault and to learn about the differences between the parts of the subduction zone that produces large earthquakes and those that do not.

The expedition began when scientists flew to nine remote communities along the Alaska Peninsula to place temporary seismometers, from June 17 to 24. The cruise leg of the mission launched on June 28 and runs until Aug. 4. The research vessel will stop around July 12 at Kodiak. The team will return to the peninsula to retrieve the land-based seismic instruments after the cruise docks.