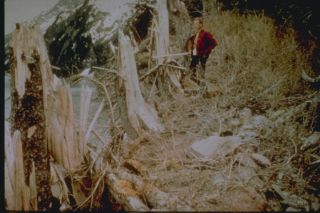 Here, trees up to 101 feet (30 meters) above sea level were splintered by the tsunami generated by an underwater landslide in Port Valdez, Prince William Sound.
(Image: © USGS)

This year marks the 50th anniversary of the 1964 Great Alaska Earthquake, an event that transformed how geologists view the Earth. Here are 11 interesting facts and figures about this historic earthquake.