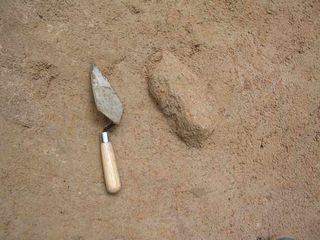 Closeup of a so-called 'chimpanzee stone hammer' under excavation.
(Image: © University of Calgary)

Chimpanzees learned to make and use stone tools on their own, rather than copying humans, new evidence suggests.

And this means that chimps and humans likely inherited some of their sophisticated stone tool-use behaviors from a common ancestor, a report on the evidence claims.

The handheld hammers were found at a chimpanzee settlement in the Ivory Coast and date back 4,300 years. Chimpanzees have been observed using similar tools for the past few centuries, but scientists assumed the intelligent apes were simply copying local people cutting open fruit nearby.

"The thinking until now was that if modern day chimpanzees use hammers, it was only because they're imitating neighboring farmers," said Julio Mercader, archaeologist at the University of Calgary and co-author of the study. "But what we've found predates farming in the area."

Since the ancient chimpanzees likely didn't learn the behavior from their contemporary man, humans and chimps may have "inherited" the ability from a common ancestor, researchers speculate.

Though there were no chimpanzee remains at the settlement, testing by archaeologists revealed the tool-laden camp was most likely used by the Great Ape. The stones were much bigger than anything a human could use comfortably and bore the residue of nuts that modern chimpanzees like to snack on.

"This is the only case of any prehistoric, non-human Great Ape tool use ever discovered," Mercader told LiveScience

Chimpanzees alive in the wild today are often seen using hammer tools to crack nuts, much like what our ancient ancestors did a few million years ago. The technology is transmitted socially--or taught, rather than instinctive from birth--and can take up to seven years for a young chimp to master, many scientists have found.

"What makes our find different is that we can demonstrate a prehistoric context for this, and that opens many doors," Mercader said. "Social transmission was the only way for this to happen."

It suggests that there is a "culture" link between chimps today and their ancient ancestors, one that could go back even further than a few thousand years, he said. Since human stone tool use was learned the same way, it's possible that both lines were taught by a single source, perhaps even millions of years ago.

Technology Not a Smooth Line

The transition from millions of years ago to the chimpanzees that lived at the ancient settlement would not have been smooth, said Mercader. Other apes in nearby areas may not have used the nut-smashing technique at all, he said, and the find asks many questions about why and how this particular group in the Ivory Coast was able to grasp the concept.

It does dispel the notion, however, that humans were the only forest-dwellers with any brains.

"We used to think that culture and, above anything else, technology was the exclusive domain of humans," Mercader said, "but this is not the case."