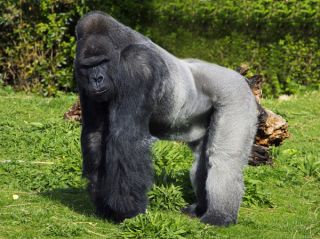 Gorillas are large apes that are native to Africa. They are typically divided into two groups. The mountain gorilla lives in the mountainous regions of central Africa, while the lowland gorilla lives in the flat, dense forests of central and western Africa. Though the two types are very similar, they have a few differences. For example, mountain gorillas tend to have longer hair, whereas lowland gorillas have short, soft hair, according to the Smithsonian.

Mountain gorillas live in Rwanda, Uganda and the Democratic Republic of the Congo, on green, volcanic mountains. Lowland gorillas live in the forests of central and western Africa in Equatorial Guinea, Angola, Cameroon, the Central African Republic, Congo, Gabon and the Democratic Republic of the Congo. A group of gorillas can have a territory of up to 16 square miles (41 square kilometers), according to National Geographic.

What do gorillas eat?

Gorillas are generally herbivores. They usually eat vegetation such as wild celery, shoots, roots, fruit, tree bark and tree pulp, but they have been known to eat small animals and insects. A male can eat up to 40 lbs. (18 kg) of vegetation each day.

Gorillas' exact diet depends on where they live. According to Sea World, about 67 percent of a lowland gorilla's diet is fruit; 17 percent comes from leaves, seeds and stems; and 3 percent comes from termites and caterpillars. The mountain gorilla eats a diet that is about 86 percent leaves, shoots and stems; 7 percent roots; 3 percent flowers; 2 percent fruit; and 2 percent snails, ants and grubs.

Gorillas live in groups. Groups of gorillas are called troops or bands. A band of gorillas can have as many as 50 members, though sometimes a band consists of as few as two members. Troops are led by a dominant male, called a silverback, which can often be identified by a gray strip of hair on his back.

Each time of day has its purpose for a troop of gorillas. Mornings and evenings are designated as feeding time. In the middle of the day, gorillas take a nap, play with other gorillas or groom one another. At night, the gorillas settle down in beds, made from leaves and twigs, to sleep.

Like humans, female gorillas are pregnant for nine months and usually give birth to only one infant at a time. Newborn gorillas weigh about 4 lbs. (1.8 kg). From the time they're about 4 months to 2 or 3 years old, young gorillas ride on their mothers' backs as a form of transportation.

At around 7 to 10 years, the young gorilla will become mature enough to have its own offspring. At this point, the gorilla will leave its mother's group to find a mate. Gorillas can live around 35 years in the wild and more than 50 years in zoos, according to the WWF.

The taxonomy of gorillas, according to the Integrated Taxonomic Information System(ITIS), is:

The International Union for Conservation of Nature (IUCN) lists the Gorilla beringei species (mountain gorillas and Eastern lowland gorillas) as endangered on its Red List of Threatened Species. They are hunted and their habitat has been destroyed by mining and agriculture. IUCN estimates that there are about 680 mountain gorillas left in two isolated populations. While data are lacking to determine the population of Eastern lowland gorillas, the IUCN says it is believed that the total population has decreased dramatically.

According to the IUCN, the Gorilla gorilla species (Western lowland gorillas and Cross River gorillas) is critically endangered, with a population reduction of more than 80 percent over three generations (a generation is about 22 years). It is unknown exactly how many of these gorillas are left. The WWF estimates that there are about 100,000 lowland gorillas still in existence.

Gorillas' arms are longer than their legs. This allows them to walk on all four limbs while still remaining somewhat upright.

These primates are very intelligent. They can use simple tools and learn sign language.

Gorillas usually don't need to drink water from lakes or streams. They get all of the moisture they need from their food and morning dew.