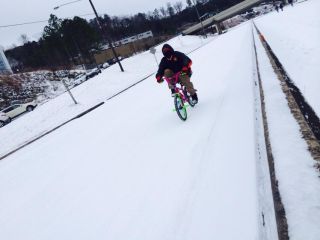 People in Birmingham, Ala., made it home any way they could after a winter storm paralyzed the city on Tuesday.
(Image: © Clinton Colmenares)

A killer winter storm paralyzed the South yesterday, but it was sunny and warm in Alaska, with record high temperatures. What's up with this weather?

Blame it on the jet stream. For months, this narrow, west-to-east flowing air current has resembled a child's scribble. The jet stream roars along Alaska's coastline and then sharply twists, diving south into Washington before flowing toward the Midwest, completely cutting off California. Because the jet stream is the dividing line between cold, Arctic air from the north and warm air from the south, these unusual undulations are steering frigid air into the eastern half of the country this winter. (Remember the polar vortex?) Meanwhile, Alaska is basking in relative warmth: The town of Port Alsworth tied the highest temperature ever recorded in January in Alaska on Monday: 62 degrees Fahrenheit (17 degrees Celsius).

But the record highs in Alaska were of little comfort to Southerners, many of whom abandoned their cars and hiked for hours to reach home in the snow and ice, or spent the night in buses trapped on highways.

When the jet stream swoops, meteorologists call it a ridge, and the one offshore Alaska right now has lasted so long it's earned a nickname: "Triple R," which stands for the "ridiculously resilient ridge of high pressure." The "Triple R" first appeared in December 2012, and has reformed again and again, making it the longest-lasting ridge in decades, meteorologist/blogger Daniel Swain recently wrote. In summer 2013, the big wiggles in the jet stream triggered record-high temperatures in Alaska and a low-pressure storm system above Alberta, Canada, that caused $3 billion in damage from flooding.

Though these jet-stream patterns have happened before, in recent years, several studies have suggested a link between an increase in the frequency of extreme kinks and waves in the jet stream, and changes in the Arctic due to global warming, such as the shrinking extent of sea ice and snow cover. Less sea ice and snow could cause warming that changes the jet-stream pattern, researchers have shown. The research is still ongoing and is an area of active debate.

Because of Alaska's record warmth, the start of the 2014 Yukon Quest Sled Dog Race will be moved from its traditional spot on the Chena River in Fairbanks, Alaska, race organizers announced yesterday. The river ice is too thin to hold spectators. The finish line must also be shifted because of dangerous trail conditions due to the unusually warm weather in Yukon, they said.

Another warm-weather casualty is the only road into Valdez. A large avalanche dammed the Lowe River near Valdez and blocked the Richardson Highway on Friday (Jan. 24). The avalanche was caused by warm weather destabilizing the snow pack, officials said. Valdez is the end of the Alaska Pipeline and a major port city, so supplies are being brought in by ship and by plane.