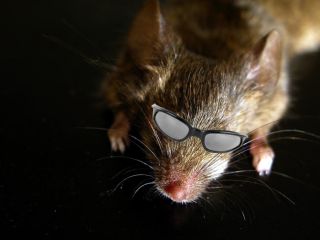 Some lab mice are finally able to experience the beauty of a rainbow, thanks to a little genetic fiddling. The rodents were injected with a snippet of DNA that allowed them to see a wider range of colors. Luckily for most people, natureÃ¢â‚¬â„¢s own modifications helped humans evolve full-color vision.

Lowering body temperature has been shown to slow aging and prolong life in cold-blooded animals such as fish, roundworms and flies. But whether the same effect could be achieved in warm-blooded animals like mammals and birds was unknown.

Researcher Bruno Conti at the Scripps Research Institute in La Jolla, Calif., and his colleagues engineered mice that had overheated cells in the hypothalamus, a brain structure that houses the body’s central thermostat. The researchers speculated that heating this area up would fool the body into lowering its overall body temperature to compensate.

Conti and his colleagues overheated the hypothalamus by overexpressing a gene that helps generate excess heat. They specifically planted that DNA in a set of 3,000 or so cells near that part of the brain.

The research team created mice whose body temperature was just a half-degree Celsius or so lower than normal. This slight change nevertheless helped the mice on average live 15 percent longer.

"This raises a new potential avenue for compounds to target that could be useful against age-associated diseases," Matt Kaeberlein at the University of Washington in Seattle, who did not participate in this study, told LiveScience.

Drugs that lower body temperature could also perhaps replace ice packs in surgery, which pose the danger "of reduced blood supply to the brain and its function," Douglas Osei-hyiaman at the National Institute on Alcohol Abuse and Alcoholism in Bethesda, Md., who did not participate in this study, said in an email interview.

Past studies have shown lifespan can be extended in animals by cutting down on the calories in their diets. Interestingly, this method also lowers body temperature. "The mechanisms mediating the increased lifespan in the 'cool mice' may be similar to those of calorie restriction," Conti speculated.

Conti and his colleagues report their findings in the November 3 issue of the journal Science.