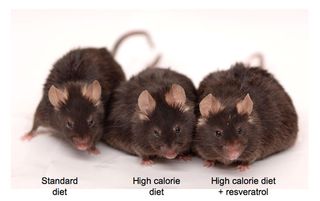 "The big question is whether or not this will work in humans," researcher David Sinclair, a molecular geneticist at Harvard Medical School, told LiveScience. If it does, "we could have a molecule that could reduce most of the negative side-effects of obesity, which could have a major impact on the two billion overweight people on the planet."

Prior studies have shown that wine can help reduce the risk of heart disease when consumed in moderation. Sinclair and his colleagues experimented with a small anti-oxidant molecule known as resveratrol, which is highly concentrated in the skin of grapes and abundant in red wine.

Past experiments suggest resveratrol might possess a number of potentially beneficial properties, including anti-cancer and anti-inflammatory effects. After first discovering that resveratrol had anti-aging properties in 2003 -- extending the lifespan of yeast by 60 percent -- Sinclair helped found Sirtris Pharmaceuticals in Cambridge, Mass., which is developing enhanced, proprietary formulations of resveratrol as well as synthetic molecules that mimic its effects.

Since 2003, research has shown resveratrol can help worms and flies live nearly 30 percent longer, and fish by almost 60 percent.

In their latest study, Sinclair and his colleagues found that after six months of treatment, mice [image] fed high doses of resveratrol and a high-fat diet lived longer than mice on the same diet without resveratrol, with a risk of death reduced by 31 percent. While the experimental mice did not lose any significant amount of weight, the team of researchers from the United States, Australia and Spain did find the mice possessed healthier hearts and livers as well as better motor skills, as measured in terms of their ability to remain atop a rotating rod.

Resveratrol also prevented many other negative effects of high-calorie diets, such as gene expression patterns linked with diabetes, heart disease and other ailments related to obesity.

"We are now about to start a similar study on rhesus monkeys," researcher Rafael de Cabo, a nutritional biochemist at the National Institute on Aging in Baltimore, told LiveScience.

Sinclair added the researchers are also investigating whether resveratrol can boost the lifespan of mice fed healthy diets.

The scientists reported their findings in the November 1 advanced online edition of the journal Nature.