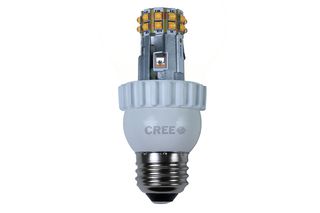 This LED bulb from Cree needs only 9.5 watts to produce the same amount of light as an old 60-watt bulb.
(Image: © Cree, Inc.)

Seth Shulman is a senior staff writer at the Union of Concerned Scientists (UCS), a veteran science journalist and author of six books. This Op-Ed was adapted from a post to Shulman's blog Got Science? Shulman contributed this article to LiveScience's Expert Voices: Op-Ed & Insights.

With tighter efficiency standards finally kicking in for 60-watt and 40-watt light bulbs this month, the Heritage Foundation's blog recently encouraged Americans to "stock up on incandescent bulbs" before the federal government "takes them away."

According to the Heritage Foundation, those old, outmoded incandescent bulbs have "become a symbol in the fight for consumer freedom and against unnecessary governmental interference into the lives of the American people."

First of all, it's worth noting that some incandescent bulbs that meet the new standards will continue to be available, so the Heritage Foundation is just plain wrong in asserting that the government is taking away a category of bulb. But the more important point about the Heritage misinformation is that recent advances in light bulb technology offer a gigantic win for consumers, businesses and the planet that will save you some serious money. Almost any way you look at it, the "governmental interference" the Heritage folks carp about has actually added up to one of the biggest across-the-board economic and environmental success stories of the past two decades.

Let's start with the raw numbers. Ironically, around the same time the Heritage Foundation published its piece, the U.S. Department of Energy issued its latest figures on U.S. electricity use showing — remarkably — that due to improvements in efficiency already in place, the average amount of electricity consumed in U.S. homes has fallen to levels unseen for a decade.

Think for a moment about how many more electronic devices we all use these days even for tasks — from brushing our teeth to reading books and magazines — that we used to do without electricity. And yet, nonetheless, we're still seeing steady declines in residential electricity consumption, down now to the 2001 level of an average of 10,819 kilowatt-hours per household. It's a remarkable and indisputable achievement that is saving you money and lowering the nation's carbon emissions. The story is, to a large extent, a direct result of government energy efficiency standards.

But first, let's look more closely at those outmoded light bulbs the Heritage Foundation wants you to buy.

Beyond any political spin, the truth is that we're on the cusp of a full-blown revolution in lighting technology. Incandescent light bulbs, virtually unchanged since Thomas Edison's heyday, have always been notoriously inefficient, emitting some 95 percent of their energy input as heat rather than light (which explains why they quickly get so hot to the touch when they are turned on).

Fast forward to today's LED bulbs that are quickly becoming the industry standard. If you're one of those who have been skeptical about the quality of light from newfangled bulbs, you owe it to yourself to give the latest generation a try. There are many varieties, but I'm a particular fan of the 60-watt equivalent "soft white" light bulbs manufactured by Cree, Inc. They look just like an old incandescent, give off an almost identical warm light while using just 9.5 watts of electricity.

That means you get virtually the same light as from an incandescent bulb while using just 16 percent of the electricity you used before. Wouldn't you rather get the same thing you once paid a dollar for while spending only 16 cents ? Of course, as an added benefit, these light bulbs produce just 16 percent of the carbon emissions of their predecessors, presuming the same fossil-fuel generating source for the electricity — a dramatic reduction that will be a major boon to efforts to tackle global warming once people widely adopt the technology.

What's particularly galling about the Heritage Foundation's advice, though, is that it is wrongheaded even from a purely economic standpoint. Sure, incandescent light bulbs long have been available for a dollar or two apiece. But the new LED bulbs now sell for as little as $10 each and are designed to last some twenty times longer than an incandescent. That's a good deal even if they used the same amount of electricity. But the real dramatic bargain comes in your monthly electric bill.

Taking charge of your electricity at home

Lighting consumes somewhere around 10 percent to 15 percent of the electricity you use. Technology rapidly is changing the picture, but when I co-wrote the book "Cooler Smarter: Practical Steps for Low-Carbon Living" in 2012 along with some of my expert colleagues at the Union of Concerned Scientists, government figures showed that the average American home spent roughly $190 annually on electricity for lighting. You would spend roughly that much by burning ten 60-watt incandescent bulbs for 8 hours each day at the national average price of electricity. By changing all ten of those 60-watt bulbs to LED bulbs using just 9.5 watts each, you would cut your annual lighting costs to just a little more than $30. Not only would you save $160 each year, you would also lower your household's carbon emissions by roughly half a ton.

Of course, over the lifetime of an LED bulb — and multiplied by millions of American households — we are talking about some serious savings and undeniable progress: getting more for less while helping the environment. What's not to like about that?

The power of efficiency standards

Which brings us to those government efficiency standards the Heritage Foundation and others love to decry. The numbers clearly show that these efficiency standards for appliances and equipment such as light bulbs have been one of the federal government's most successful strategies for reducing energy consumption since their inception more than two decades ago.

What makes energy-efficiency programs so appealing is that they can quickly yield significant reductions and save money for both consumers and businesses. An analysis by the Union of Concerned Scientists shows in detail how efficiency measures using existing technology could cut total U.S. energy consumption by 29 percent by 2030, if Americans found the political will to implement them.

The key thing to understand is that most manufacturers are fully capable of making their products a lot more energy efficient right now. But changes in their processes might incur modest costs that could put them at a disadvantage to their rivals. That's where government efficiency standards come in. They work because manufacturers know that their competitors must abide by the same rules. Ultimately, everyone benefits.

Government light bulb standards are just one example. The ones kicking in this month actually stem from the 2007 federal energy bill enacted during President George W. Bush's administration that started to phase out the sale of inefficient incandescent bulbs beginning in 2012.

How well have these kinds of efficiency standards worked in getting more for less? The answers are all around us. Some modern 40-inch LED televisions bought today use 80 percent less power than the old cathode ray televisions of the past. The average desktop computer costs you some $28 to run annually while doing the same things on that iPad or other tablet will run up less than $2 in yearly electricity costs.

The case of refrigerators is especially instructive. Refrigerators — one of the biggest electricity guzzlers in most American homes, cost the average household somewhere around $123 per year to operate. What this figure masks, however, is the striking progress made in efficiency. Six rounds of progressively stronger standards helped to push a dramatic change that benefits all. The first three rounds (initiated by California and then picked up by other states) took place from 1978 through 2003, while the later ones were adopted at the federal level. After the 2003 rule took effect, the average new refrigerator was 60 percent cheaper and 20 percent larger than its mid-1970s counterpart and used 70 percent less electricity.

Putting aside the hype and misinformation, appliance efficiency standards introduced over the last few decades have helped speed this process along, bringing down energy use per appliance dramatically, reducing total U.S. electricity consumption as of 2010 by an estimated 7 percent below the amount that would have been consumed without those standards in place. Some of the U.S. government's programs, such as the current Energy Star program, offer only voluntary guidelines rather than mandatory standards. According to the government, in fact, if every refrigerator, dishwasher and clothes washer purchased in the United States this year had been required to meet the federal government's current Energy Star efficiency guidelines, we would have saved another $700 million in annual energy costs while preventing 2 million more tons of greenhouse gases each year, equivalent to the annual emissions from some 350,000 cars.

Of course, the Energy Star program also shows that we don't need to wait for mandatory government standards to see results. Smart consumer decisions can help you reap even more savings, and for those interested, Cooler Smarter offers a lot more science-based advice to sort these kinds of choices out for yourself.

The key is this: the next time you hear whining about government efficiency standards "taking away" your rights, consider the evidence. And then go treat yourself to a night or two on the town to celebrate all the money you are saving and the good you're doing for the environment.

Shulman's most recent Op-Ed was "Got Science? Champions Who Stood Up for Science in 2013." This Op-Ed was adapted from "Beyond the Misinformation: Why Energy Efficiency Standards are Cause for Celebration" on his UCS blog Got Science?. The views expressed are those of the author and do not necessarily reflect the views of the publisher. This version of the article was originally published on LiveScience.