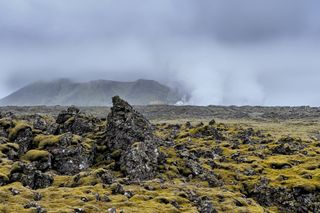 It's not every day that scientists can study a volcano up close, but researchers investigating the feasibility of volcano-powered electricity successfully drilled into the core of one in Iceland.

Scientists studied the volcanic system at Reykjanes Peninsula in Iceland, which has been dormant for more than 700 years, according to a hazard assessment by Verkis Consulting Engineers for Invest in Inceland.

The depths of Reykjanes' geothermal field — an area with high heat flow — had never been explored, researchers with the Iceland Deep Drilling Project (IDDP) said in a statement. Beginning in August 2016, the IDDP spent 168 days drilling into the volcanic belly of Reykjanes. This well was completed on Jan. 25, reaching a record-breaking depth of nearly 3 miles (4.8 kilometers). [The 11 Biggest Volcanic Eruptions in History]

At this depth, the hole does not enter the magma chamber but does penetrate the rock surrounding it, which the researchers measured to be about 800 degrees Fahrenheit (427 degrees Celsius).

Geothermal energy uses the heat trapped beneath the Earth's surface to generate electricity. Conventional geothermal energy utilizes steam from natural sources such as geysers, or by drawing water from the hot, high-pressue depths of the Earth. The hot vapors are then used to drive electric turbines.

In the case of volcanic geothermal energy, the heat comes from "supercritical water." The researchers explained that energy from so-called supercritical water is much higher than conventional geothermal steam. When molten rock and water meet, the extreme heat and pressure bring water to a "supercritical" state, where it is neither liquid nor gas. In this form, the water can carry more energy than normal steam, which could create up to 10 timesthe power output of other geothermal sources.

Research will continue through 2018 to explore how the volcano's thermal energy could be used, including as a form of alternative energy, according to IDDP scientists.

"If deep supercritical wells, here and elsewhere in the world, can produce more power than conventional geothermal wells, fewer wells would be needed to produce the same power output, leading to less environmental impact and improved economics," IDDP researchers said in the statement.

Geothermal energy is a major source of energy in Iceland, with about 25 percent of the country's electricity generated from tapping the Earth's heat, according to the National Energy Authority of Iceland. About 90 percent of Icelandic households are heated with geothermal energy.