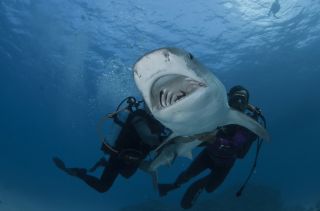 A new four-year study of tiger sharks off the coast of Australia has revealed patterns in the animals' mysterious migratory wanderings, including curious differences based on the gender and age of the sharks.

The study, led by Jonathan Werry, a researcher at Griffith University in Australia, tracked 33 tiger sharks (Galeocerdo cuvier) using satellite and acoustic transmitters as they traveled across the Coral Sea, which lies between the Great Barrier Reef, off the east coast of Australia, and the Pacific island of New Caledonia. The sharks ranged in length from 5 feet (1.5 meters) to nearly 13 feet (4 m).

The researchers found that mature female sharks tend to be the ones making long-distance journeys across the Coral Sea — between the deep ocean and the more shallow, coastal waters — while adult males and younger females were found to linger in oceanic reefs away from the coasts. [In Images: Tracking Tiger Shark Migrations in the Coral Sea]

"In the reef system in the center of the Coral Sea, 500 nautical miles [575 miles, or 930 kilometers] from either coastline, we saw extraordinary year-round residency for mature males and pre-reproductive females," Werry told LiveScience. "This is quite interesting, because it's a reverse of the behavior we see when these animals are in the coastal areas."

Previous research on the migration of tiger sharks discovered that these animals are typically transitory along coastal reef systems, and do not seem to remain at, or return to, particular sites for long periods of time, he added. The results of the new study, however, indicate that tiger sharks may actually favor certain regions farther out in the deep ocean, where food sources may be more abundant.

"What you get in coastal areas is a very sporadic group of large sharks, and then it looks like mature females are the ones migrating between coastal areas and oceanic reefs — something that's probably driven by their pupping cycle," Werry said. "This tends to suggest these oceanic regions are vital to their ecology."

The findings also indicate that tiger sharks do not have uniform traveling habits.

"Sometimes, you can look at species as a whole for migratory patterns, but tiger sharks have quite a complex life history strategy that varies dramatically between males and females, and between when they are immature and mature sharks," Werry said.

Researchers are beginning to unravel some of the mysteries of tiger sharks' migration patterns, but many unanswered questions remain. For instance, Werry and his colleagues are investigating whether oceanic reefs function as important mating spots, which could help explain why adult males choose to remain in the area for extended periods of time.

The new study also examined shark migratory patterns in three dimensions, which included recording measurements of how deep the sharks dived. "Instead of just looking at movements from one place to another, we also looked at how the sharks use the water column," Werry explained.

"That's an extraordinarily deep dive for a large shark," Werry said. "These three-dimensional measurements give us insight into the range of environments that sharks are using, and point out the importance of oceanic habitats, in addition to coral reefs."

Understanding the migratory habits of tiger sharks, and which areas of the marine environment are most crucial to the animals, is critical for the management and protection of the species, the researchers said. Tiger sharks are classified globally as "near threatened" by the International Union for Conservation of Nature, the world's main authority for the conservation status of wildlife.

"Management strategies need to consider the wide-ranging movements of large (subadult and adult) male and female tiger sharks at the individual level — in particular, when fidelity to specific coastal reefs may be consistent across groups or individuals," Werry said in a statement. "The importance of oceanic Coral Sea reefs should be a priority for future research."

The new study, performed in collaboration with the French government, was published online today (Jan. 8) in the open-access journal PLOS ONE.