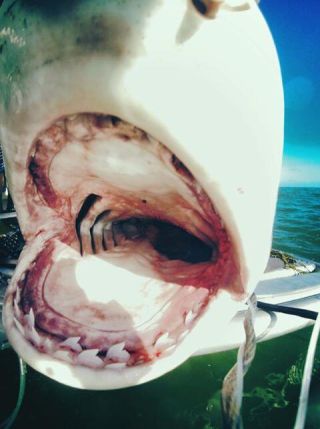 Here's an image no swimmer would want to see in real life: a massive tiger shark with its jaws open, as if ready to devour an observer.

Though the picture makes it look like the photographer was the shark's next meal, no one was ever in danger, said David Shiffman, a doctoral candidate in marine biology at the University of Miami's Abess Center for Ecosystem Science and Policy, who posted the photo on Twitter (but was not on the boat at the time the photo was taken).

The sharks travel huge distances, with some swimming to the middle Atlantic Ocean or to South America from the Bahamas, though it's often not clear exactly why they do it.

Several weeks ago, Shiffman's colleagues captured a tiger shark off the coast of Florida and brought the animal onto the semi-submerged platform behind their boat, with water still buoying the shark's body. The researchers propped the predator's mouth open with a hook, and gently restrained the animal as they collected samples. A photography intern, Cat Schultz, got the scary photo before the shark moved.

The tiger shark is an opportunistic generalist, feeding on seabirds, ocean-dwelling mammals and even turtles. Some scientists have even found tiger sharks with suits of armor or license plates in their bellies.

"People call them the garbage disposals of the oceans," Shiffman said.

Their mouths are key to their indiscriminate eating habits. In order for the sharks to chomp through a sea turtle shell, they need to have a powerful bite force. Even as babies, their mouths are disproportionately large, the better to engulf unsuspecting prey.

"When they're babies, they're basically all head," Shiffman said.