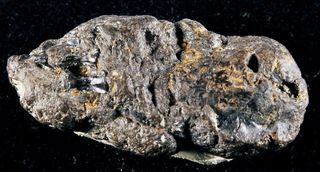 LOS ANGELES — More than 70 million years ago, a baby shark may have bitten off more than it could digest.

A fossilized hunk of poop from an ancient baby shark has revealed the tiny predator's last meal: a baby turtle. The findings were presented here at the 73rd annual meeting of the Society of Vertebrate Paleontology.

"It's a case where a newborn shark ate a newborn turtle and died," said study co-author David Schwimmer, a paleontologist at Columbus State University in Georgia.

The 1.5-inch-long (3.8 centimeters) piece of fossilized poop, technically known as a coprolite, was found at a fossil bed near the South Carolina coastline. Between 70 million and 80 million years ago, when the poop's owner lived, the area was a tidal estuary where the ocean met inland river systems. [8 Weird Facts About Sharks]

Based on the size of the coprolite, Schwimmer and his colleagues hypothesize that the shark that ejected it was a newborn. Inside the coprolite were several tiny turtle vertebrae, each about 0.1 inches (about 3 millimeters) long, which must have come from a very young turtle.

The vertebrae suggest the turtle is a soft-shell freshwater species, whereas the shark comes from a marine environment. Based on that information, Schwimmer believes the shark may have emerged from an estuarine pupping ground, where baby sharks hatched. Once the newborn shark emerged, it devoured the unsuspecting newborn turtle.

The turtle was probably about 4 inches (10 cm) across, while the shark may not have been much bigger. The fact that the vertebrae were undigested indicates the baby predator died not long after eating, possibly because its last meal didn't sit well with the animal, Schwimmer said.

"It's possible the turtle was too much shell," Schwimmer told LiveScience. The shark "may have died from too much turtle."

Though Schwimmer hasn't determined the shark and turtle species, one possibility is that the shark may be the extinct coastal predator Squalicorax kaupi. The turtle may have been a relative to common freshwater species that are found in the region today.

This isn't the first time paleontologists have gleaned something from ancient shark poop. Other shark coprolites have revealed that sharks dealt with tapeworms even 270 million years ago, and fossilized dung from other animals can reveal their dietary habits.