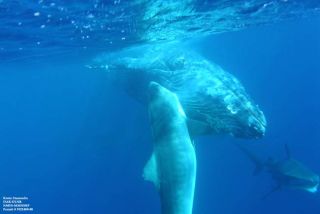 A tiger shark attacks a juvenile humpback whale near Hawaii. Indiscriminate predators, tiger sharks are among the world's largest. The biggest can exceed 18 feet and 2,000 lbs. On average, the females, larger than the males, are between 12 and 13 feet. They are known to attack humans.
(Image: © Kosta Stamoulis, NOAA NMFS Permit #932-1489-08.)

Tiger sharks have gained notoriety for their voracious appetites — they'll devour just about anything, from sea turtles to kegs of nails to a few unlucky humans — yet of late, it is their mysterious travel habits that have excited interest in the scientific community.

Where these large sharks spend critical times of their lives has remained in the dark, but recently, researchers at a university in Florida announced the most extensive tracking ever of tiger sharks' mysterious migratory wanderings. And what they found was surprising.

"The results that we found were completely unexpected," said Mahmood Shivji, director of the Guy Harvey Research Institute (GHRI) at Nova Southeastern University. "We didn't have a clue that these tiger sharks would make these long-range migrations."

It was known that tiger sharks can be found in deep oceans — they're pulled up as bycatch by fisheries — and that they loiter for months at a time in the shallow and warm waters around tropical coral reefs. Now it appears that some sharks make the long commute to spend time in both of these wildly different environments.

Shivji's team, working in concert with partners at the Bermuda Shark Project, fitted seven tiger sharks with satellite tags in Bermuda in 2009, and five of those animals have provided consistent results in the intervening months. One shark's tag has been sending regular messages to the satellite for a record 21 months.

"No one has been able to do that so far, so we're very lucky," Shivji told OurAmazingPlanet.

From Bermuda, the tagged sharks made a beeline to the Bahamas, and, after several months in the warm waters, turned and swam northeast to the middle of the Atlantic Ocean.

"What are they doing in the middle of the Atlantic?" Shivji said. "Is it food, is it sex?"

Shivji said the only correlation the team has found so far is temperature and perhaps, like much of Florida's human population, the sharks follow warmth.

John Carlson, a research biologist with the National Marine Fisheries Service in Panama City, Fla., said much of the new satellite research on shark migrations is possible because sharks inadvertently cooperate with the technology — which essentially acts like a GPS device. Just like your smartphone or that handy machine in your car, the device has to be able to talk to the satellite.

"A lot of these sharks come to the surface a lot more than we thought," Carlson, who was not part of Shivji's research, said. "The dorsal fins break the surface of the ocean with a frequency that surprised us."

Carlson said that tracking sharks of all kinds is important for a number of reasons, but one of the chief among them is helping scientists identify regions of the ocean where young sharks are most vulnerable to fisheries.

Some shark populations have declined at alarming rates in recent years — some as much as 80 percent over the last few decades.

Although there's no evidence that tiger sharks are facing catastrophic declines, and population data are spotty, Shivji said there are certainly indications the population has decreased in recent years.

The species is listed as vulnerable by the International Union for the Conservation of Nature, an independent organization that assesses the status of animal populations around the globe.

Though Shivji cautioned that the behavior of a few individuals can't indicate the habits of an entire species, he said the data are compelling.

"Tiger sharks are quite enigmatic. Very little is known about their biology in terms of where they pup, and where they mate," Shivji said, "We want to understand where they spend most of their time, and at the time of their most critical life history."

The team has tagged several dozen more tiger sharks at locations around the globe, and Shivji said the group plans to publish their work later this year.