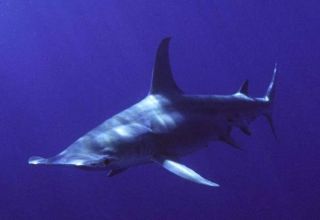 Satellite technology has allowed scientists to follow a single hammerhead shark's epic, 62-day journey from the warm waters of southern Florida to the temperate mid-Atlantic region off the coast of New Jersey.

Study authors say this is the first time satellite tags have been successfully used to track a great hammerhead shark — a solitary, nomadic fish that lives in tropical waters around the globe and is highly endangered in some regions.

Neil Hammerschlag, an assistant professor at the University of Miami's Rosenstiel School of Marine & Atmospheric Science, said the hammerhead traveled extraordinarily far in a short amount of time — 745 miles (1,200 kilometers), as the crow flies, in just over three months.

"This single observation is a starting point, it shows we need to expand our efforts to learn more about them," Hammerschlag said.

This preliminary study is part of a larger effort by Hammerschlag and colleagues to track tropical sharks to identify hotspots — areas that are important for feeding, mating and pupping — and to document the iconic fishes' largely unknown migration routes.

In the last year, the team has tagged the fins of more than 50 large and environmentally threatened sharks in Florida and the Bahamas, among them great hammerhead, bull and tiger sharks.

Shark populations worldwide have faced steep declines in recent years, and as many as one-third of the planet's shark species are now endangered — and great hammerheads have not escaped the alarming trend.

Although often killed when inadvertently caught up as bycatch by large fisheries, great hammerheads themselves are often the target of fishermen. Their large fins are a prized ingredient of shark fin soup, a sometimes controversial dish and a showpiece of traditional Chinese cooking served on special occasions, which can cost as much as $100 a bowl.

Data are scarce on the great hammerhead. Because of its elusive migratory habits, the fish is difficult to study. However, according to the International Union for the Conservation of Nature (IUCN), the organization that assesses the status of animal populations worldwide, the evidence suggests that the number of great hammerheads has dropped by roughly 80 percent over the last 25 years.

"This study provides evidence that great hammerheads can migrate into international waters, where these sharks are vulnerable to illegal fishing," Hammerschlag said. "By knowing the areas where they are vulnerable to exploitation, we can help generate information useful for conservation and management of this species."

This article was provided by OurAmazingPlanet, a sister site to LiveScience