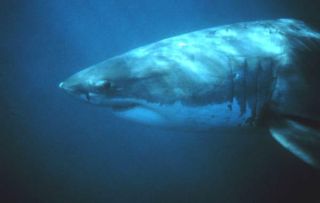 A great white shark swims off the California coast. The state may enact a ban on the possession of shark fins.
(Image: © NOAA.)

California lawmakers have introduced a bill to ban the possession, sale and distribution of shark fins, the key ingredient of shark fin soup, a prized delicacy in traditional Chinese cooking.

Shark fin soup , usually served at weddings or other celebrations, is pricey a single bowl can sell for upwards of $40 to as much as $100, according to Time magazine.

Two Democratic assemblymen introduced the state bill (AB 376) with the support of environmental groups and institutions such as The Monterey Bay Aquarium, which has strongly endorsed the legislation.

The federal Shark Conservation Act , signed into law earlier this year by President Obama, aimed to end shark finning an illicit practice used to collect the coveted fins. In the grisly procedure, fishermen slice the dorsal fins off a living shark.

Although the sharks are dumped back into the water still alive, they don't stay that way for long. Without their fins, the animals come to a ghastly end, bleeding to death, suffocating because they can't swim, or being eaten by other sharks.

The practice is banned in U.S. waters, with the exception of a fishery in North Carolina. The exemption was added to the federal law at the behest of North Carolina Republican senator Richard Burr, who otherwise would not have voted for the measure.

According to a 2006 study, between 26 million and 73 million sharks are killed each year for their fins, and many shark species around the world are endangered.

In fact, one-third of the sharks, rays and skates on Earth are threatened with extinction , according to a recent study by the International Union for Conservation of Nature, the organization that assesses the status of animal populations around the world.

In 2010, Hawaii legislators passed one of the world's first laws to ban the possession, sale and distribution of shark fins.

Some in California are opposing the proposed ban on the possession of shark fins, saying it is an unfair attack on Asian culture and cuisine.

"Some sharks are well-populated and many can and should be sustainably fished," said State Sen. Leland Yee (D-San Francisco) in a statement.