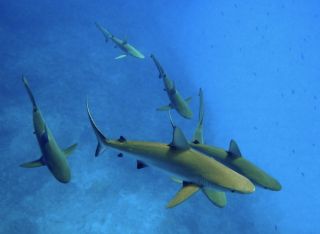 A full moon and warm waters may send some sharks diving deep, according to a new study.

In the winter, the sharks stayed closer to the surface, at an average depth of 115 feet (35 meters), where water was consistently warmer, the team found. Meanwhile, the sharks plunged deeper when seasonal temperatures started rising in the spring, averaging depths of 200 feet (60 meters). [On the Brink: A Gallery of Wild Sharks]

The sharks also changed their behavior in sync with the lunar cycle, diving deeper during the full moon but sticking to the shallows with the new moon. Previous tagging studies showed that other open-water predators — including swordfish, yellowfin and big eye tuna — also go to greater depths as the lunar cycle progresses. This suggests the moon's brightness might sway the movements of many big fish.

And the sun seemed to have an effect, too; the sharks hit their greatest depths at midday when the most sunlight broke through the water column, and they began floating back up to the surface in the afternoon.

"This matches how light changes on the reef during the day," Gabriel Vianna, of the University of Western Australia, said in a statement. "To our knowledge, this is the first time such patterns have been observed in detail for reef sharks."

"In places such as Palau, which relies heavily on marine tourism and where sharks are a major tourist attraction worth $18 million a year, the fishing of a few dozen sharks from popular dive sites could have a very negative impact on the national economy," Vianna explained. "This is potentially a big concern, because it could happen in just a couple of days."

Gray reef sharks are quite common and typically not of concern to conservationists. But shark populations have been dropping worldwide. A report out this year found that 100 million sharks are killed each year and many species are threatened due to overfishing. After a vote by conservationists last month, the international trade of five different sharks is set to be regulated under the Convention on International Trade in Endangered Species of Wild Fauna and Flora (CITES). The species that will get new protections are heavily targeted by the shark-finning industry.

The new findings were detailed online April 10 in the journal PLOS ONE.