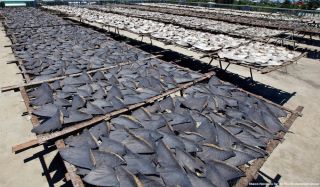 Shark fins drying in the sun in Kaohsiung before processing. 30 percent of the world’s shark species are threatened or near threatened with extinction.
(Image: © Shawn Heinrichs for the Pew Environment Group)

Aggressive overfishing threatens to push some shark species to extinction, and a new study puts annual shark deaths at 100 million.

"Our analysis shows that about one in 15 sharks gets killed by fisheries every year," study leader Boris Worm, a professor of biology at Canada's Dalhousie University, said in a statement. "With an increasing demand for their fins, sharks are more vulnerable today than ever before."

Based on available data for shark deaths and estimates of unreported illegal catches, the researchers estimated that 100 million sharks were killed in 2000 and 97 million in 2010. But since scientists lack sufficient data on shark catches, they say the real number of annual shark deaths could possibly be between 63 million and 273 million.

Sharks are fished for their meat, liver oil, cartilage and valuable fins, which are hacked off, often from live sharks, to be used in shark fin soup, an ancient and prized delicacy in East Asia. Since sharks have slow growth and reproductive rates, it can be tough for their populations to bounce back from big losses.

Conservationists say the depletion of shark populations is concerning because as apex predators, they help balance ecosystems in the world's oceans. [On the Brink: A Gallery of Wild Sharks]

"In working with tiger sharks, we've seen that if we don't have enough of these predators around, it causes cascading changes in the ecosystem, that trickle all the way down to marine plants," said study researcher Mike Heithaus, a Florida International University biologist.

On March 3, hundreds of delegates from 177 different countries will descend on Bangkok for the meeting of the Convention on International Trade in Endangered Species of Wild Fauna and Flora (CITES). On the agenda will be increased trade protection for five species of sharks — the oceanic whitetip, porbeagle and three types of hammerheads — which are hunted for their fins.

"A simple vote 'yes' to support their listing could turn things around for some of the world's most threatened shark species," Elizabeth Wilson, manager of global shark conservation at the Pew Charitable Trusts' environmental organization, said in a statement today. "Countries should seize this opportunity to protect these top predators from extinction."

Sharks have a PR problem that might be hurting their chances of survival. A study out last year found that a majority of the media coverage they get involves shark attacks on humans, which doesn't reflect how rare these scary encounters are. In 2012, there were 80 confirmed shark attacks worldwide, but only seven of them were deadly, according to the University of Florida's International Shark Attack File.

The new research was detailed online in the journal Marine Policy.