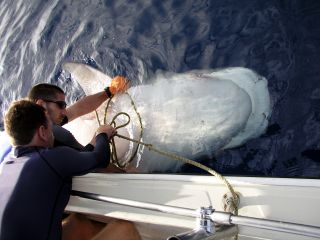 Researchers Carl Meyer (left) and Yannis Papastamatiou restrain a tiger shark by flipping it on its back, after which the shark becomes docile. They then attached a tag to the tiger and set it free.
(Image: © University of Hawaii)

Traditional Hawaiian stories warn about an increased danger of shark bites in the fall, from September to November. A recent study shows that there could be something behind this folk wisdom: During this time, an increased number of tiger sharks make their way to the islands, likely to give birth.

"Both the timing of this migration and tiger shark pupping season coincide with Hawaiian oral traditions suggesting that late summer and fall, when the wiliwili tree blooms, are a period of increased risk of shark bites," said study co-author Carl Meyer, a researcher at the University of Hawaii, in a statement.

But Meyer and lead author Yannis Papastamatiou, a researcher at the Florida Museum of Natural History, said that people shouldn't jump to the conclusion that this migration is directly related to recent shark bites near the islands. That's because shark bites are extremely rare — claiming only an average of 15 lives per year globally, according to The International Shark Attack File — and thus are difficult to study and understand the reasons behind, Papastamatiou told LiveScience. There are only two to four shark bites in Hawaiian waters every year, he added.

The study that found the potential link involved tagging tiger sharks over a seven-year period, and included more than 100 animals, most of them female. About 25 percent of the female sharks are expected to return to the main Hawaiian Islands every year, according to the study, to be published in the November issue of the journal Ecology. [8 Weird Facts About Sharks]

While some tiger sharks arrive and depart the islands each year, a larger percentage sticks around, the study found. That agrees with recent research on other animals showing that migrations typically don't involve every member of an animal population, and — counter to popular belief — a large number of individuals typically stay behind during migrations, Papastamatiou said.

"You see that in all groups — birds, fish, whales, turtles, and now we're seeing in sharks as well," he said.

The tiger sharks tagged in the study carry acoustic tags that can be read by 143 underwater "listening stations" positioned around the islands, which register an animals' location and identity when it passes by. When the sharks leave the area, though, it's unclear where they go, since the stations are clustered near Hawaii. One animal tagged in the Hawaiian Islands was caught by fishermen off the coast of Mexico, showing the tiger sharks can make long voyages, Papastamatiou said. But why certain sharks voyage that far, or how often they do it, remains unclear, he added.