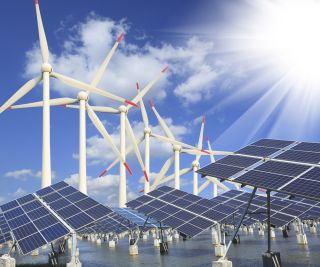 As green energy sources such as wind and solar slowly make up a larger portion of the U.S. energy picture, a smart grid will be better able to integrate and transmit that energy across the power grid.
(Image: © ArtisticPhoto | Shutterstock)

Older electrical grids send electrical power one direction, from a power plant to homes and offices. A smart grid improves on that network by providing instantaneous feedback on system-wide operations, power interruptions and electrical use back to electrical plant and regional power grid operators.

A smart grid can use real-time monitoring to modify and tune itself to an optimal state of performance, delivering electricity evenly — even during peak-usage hours — and anticipating problem areas and service disturbances. It can also isolate parts of the electrical network that are at risk of failure, to prevent small-scale, brief interruptions from turning into region-wide, long-term blackouts.

According to the Department of Energy, a smart grid will permit more efficient transmission of electricity, lower operating and kilowatt costs, quicker restoration of electricity after outages and reduced energy use during peak-demand hours.

One of the features of a smart grid is its "self-healing" capacity, that is, its ability to automatically work around power failures by detecting and isolating outages, then rerouting electricity to meet demand — an ability that would have minimized or prevented the 2003 blackout.

A self-healing smart grid would be indispensable in the event of a natural disaster, when access to light, heat and communication can be lifesaving. Hurricane Sandy, which devastated parts of the East Coast in 2012, was a hard lesson for much of the U.S. power industry, as it exposed the many vulnerabilities of the region's electrical network.

As green energy sources such as wind and solar slowly make up a larger portion of the U.S. energy picture, a smart grid will be better able to integrate and transmit that energy across the power grid.

The dryer's drum would continue to spin, and the operator wouldn't even know that the heat had been turned off for a few seconds. Multiplied over millions of energy-using appliances, the net effect will allow grid operators to prevent power outages and use available electricity more efficiently hour after hour, year after year.

The United States has spent about $7.8 billion on smart-grid infrastructure improvements. In 2007, the Energy Independence and Security Act (EISA) established a Federal Smart Grid Task Force and authorized the Department of Energy to develop a federal funding program for smart grid investments. [Power of the Future: 10 Ways to Run the 21st Century]

And in 2009, the Obama administration announced 3.9 billion in grants to integrate renewable energy development with smart grid technology.

Not only will these infrastructure improvements improve the stability and resilience of the electrical grid, but proponents claim building a smart grid will create over 200,000 high-paying jobs, and greatly reduce the costs associated with electrical use, power failures, adverse weather and natural disasters.