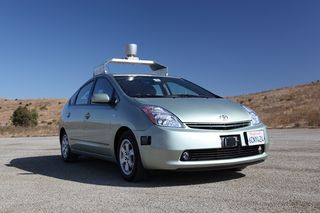 One of the Toyota Priuses outfitted by Google to drive autonomously.
(Image: © Google, Inc.)

Melba Kurman, author, and Hod Lipson, Cornell University associate professor in mechanical and aerospace engineering, are co-authors of  "Fabricated: The New World of 3D Printing"(John Wiley & Sons, 2013), and are leading voices in the field of 3D printing. They contributed this article to LiveScience's Expert Voices: Op-Ed & Insights as part of their new LiveScience series highlighting issues and developments in emerging technologies.

What do Amazon's delivery drones, policy meetings on automotive information technology, Google's ongoing acquisition of robotics technologies and the decline of Detroit have to do with one another? These seemingly disconnected events indicate that the future of transportation is entering a new era: Vehicles entirely guided by intelligent software rather than a human driver or pilot are finally becoming technologically viable. After decades of optimistic (and ultimately failing) predictions, the everyday process of moving people and stuff around is about to be transformed by advances in mobile robotics and artificial intelligence.

The big question now is no longer "will self-guided, or driverless vehicles become a reality?" Instead, the question is "when will driverless vehicles become reality, and what industries will lead the way?" The industry best poised to disrupt transportation is going to be the software industry, not the automotive industry. Driverless cars and self-guided delivery drones represent a revolution in mobile robotics and artificial intelligence, not in automotive or aviation technology. If car makers were truly leading the way, the world's first fleets of driverless cars would be tooling around the streets of Detroit, not Silicon Valley.

The role of mobile robotics

A fully autonomous vehicle is one entirely driven by on-board technologies. Airborne drones and autonomous vehicles alike are guided by computers that rapidly process streams of data from on-car sensors, radar or laser scanners, satellite GPS data and onboard 3D cameras. Or, in other words, an autonomous vehicle is essentially an artificially intelligent mobile robot on wheels. In the future, as driverless car technology matures, the human passenger will sleep, read, work … or might not be on board at all as the car's robotic driver drives itself off to find a parking spot.

The notion of self-driving cars is nothing new. As early as the 1950s, researchers at RCA, the state of Nebraska, and General Motors created a working model of what they called an "Electronic Highway" upon which autonomous cars cautiously rolled forward, guided by a system of wires, cables and transistors embedded in the highway. In the decades that followed, researchers from universities and car companies developed and test-drove various sorts of semi-autonomous driverless vehicles (meaning a human driver handled some degree of driving) around streets and highways.

Unlike the demonstration models of the 1950s, today's self-driving vehicles don't need specially outfitted highways since they carry their computers and sensors onboard. What's changed is that finally society is reaching the tipping point where rapidly converging information technologies can give a moving robotic vehicle sufficient sensory perception and enough artificial intelligence that's physically small in size to be mobile — and cheap enough to be commercially viable. Google's fleet of self-driving Toyota Priuses have proven that autonomous vehicles not only are technologically possible, but also a safe and reliable mode of transportation, logging more than 500,000 driving miles with only a single accident (which was caused by a human driver).

Who's driving the innovation?

If you think about driverless cars as mobile robots on wheels, or drones as airborne droids, it starts to make sense why technology companies like Google and Amazon, and young automotive companies like Tesla, have been first to realize the technology's potential. Although research engineers at big car companies have been inventing and demonstrating successful nearly-autonomous prototypes for years now, automotive executives continue to predict that commercial viability of these systems is at least a decade away. To remain viable, car companies are going to have to reinvent themselves.

To be fair, most mainstream, commercial cars sold today boast some form of built-in, intelligent "driver assist" systems that help drivers safely change lanes, brake more safely, park better and the like. There are also good reasons that car companies are taking a cautious approach. The automotive industry has caution built into its DNA, given the serious safety issues at stake in automotive design. In addition, even the simplest car is the product of a long and complicated chain of automotive suppliers, so introducing radical new design changes into a mass-produced car is not a trivial matter.

The good news, however, is that executives at big car companies and federal transportation officials, though slow to the party, are finally starting to stir and come to life. Perhaps spurred into action by the attention being showered on Google, Volvo and Nissan announced initiatives to work with local communities in Sweden and Japan to develop fully autonomous vehicles over the next few years. In the U.K., in a town called Milton Keynes, driverless "pods" (a two-person "car-let" that will travel at 12 mph) will be shuttling people around on designated pathways by the year 2015. The University of Michigan and a consortium of car companies are investing in a 30-acre driverless-car test site with the goal of creating a communally owned fleet of self-driving vehicles for the city of Ann Arbor by 2021.

Regardless of which companies end up leading the race to the market, the road ahead is long and uncertain. Technology tends to develop more quickly than people and organizations can reasonably accommodate its potential. More governments should follow the examples of the states of California, Nevada and Florida, which have legalized the use of autonomous vehicles on public roads. In the United States, the Federal Department of Transportation's National Highway Traffic Safety Administration has taken a few cautious steps forward to consider the possibility of fully autonomous vehicles, releasing a policy expressing tepid support and a set of fairly obvious recommendations for the development of self-driving vehicles.

But bolder action is needed.

What if cities were given federal funding to create a designated "autopilot" lane? The autopilot lane would function something like HOV lanes do today. The autopilot lane would be safely walled off from the rest of the highway. Passengers in vehicles with autopilot functionality would merge into the autopilot lane, hand over the controls to the car's computer, and then re-take control of the wheel after re-entering regular traffic lanes with human drivers. Designating highway lanes on underused stretches of selected highways would be much cheaper and simpler than building high-speed rail, and would be a catalyst to the burgeoning industry of driverless cars, as well as an invaluable source of on-road test data.

A financially devastated city such as Detroit that's full of empty, unused stretches of highways would be an ideal demonstration site for autopilot lanes.

All over the world, people are seeking safer, cleaner, cheaper and more efficient ways to transport both people and freight. Self-driving cars and autonomous delivery drones will help ease traffic jams, reduce emissions from cars idling in traffic and will solve the growing problem of distracted (not to mention impaired) driving. If the average American spends the equivalent of four work weeks each year behind the wheel, and fuel emissions have become the No. 1 source of air pollution according to the U.S. Environmental Protection Agency, what are we waiting for?

Kuman and Lipson's most recent Op-Ed was"Why Patents Won't Kill 3D-Printing Innovation." Follow Kurman @melbakurman. The views expressed are those of the authors and do not necessarily reflect the views of the publisher. This article was originally published on LiveScience.