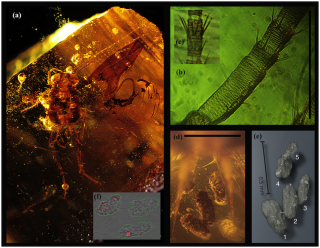 A preserved cockroach that died in the act of pooping. The fossilized excrement is shown in panels D and E.
(Image: © PLOS ONE)

Scientists now have an answer to a question you never knew you had: What happened to all the dinosaur dung? Cockroaches vacuumed it up, a new study suggests. One animal's waste is another animal's gourmet meal.

Researchers from the Slovak Academy of Sciences in Slovakia stumbled on the finding by accident while researching the diet of ancient cockroaches in the now-extinct Blattulidae family. Using sophisticated imaging methods, they found particles of wood inside the roach's gut that they think came from dinosaur feces.

"Dinosaurs undoubtedly produced huge quantities of excrements," the researchers wrote in the study, detailed Dec. 4 in the journal PLOS ONE. "Although appearing trivial, cockroaches, one of the dominant insect orders during the Mesozoic were never examined as representing top candidates for partial processors of dinosaur dung."

Dung beetles and quickly maturing flies were rare during most of the Mesozoic (about 250 million to 65 million years ago). But ancient cockroaches roamed the Earth around the same time as herbivorous dinosaurs. [Image Gallery: 25 Amazing Ancient Beasts]

Using a method called synchrotron X-ray microtomography, the researchers created a virtual 3D version of a fossilized cockroach preserved in a piece of amber in Lebanon dating from the Lower Cretaceous (about 120 million years ago). The unfortunate roach expired in the act of relieving itself, leaving a partially extruded piece of fossilized poop, known as a coprolite, that contained bits of wood.

The wood particles had smooth edges, suggesting the roach didn't chew them. And the insect's digestive system wasn't capable of decomposing the wood. The most likely explanation, the researchers concluded, was that the roach ate some poop from an herbivorous dinosaur.

Other fossilized species of cockroaches have been found with undigested carbon-based debris in their guts, but only the bowel of the Blattulidae specimen contained wood. Members of the Blattulidae family represented about 1 percent of all insects and more than 30 percent of cockroaches alive during the Mesozoic, and probably co-existed with a dominant vertebrate group such as sauropod dinosaurs, the researchers said.

The roaches lost their food source when their suppliers went extinct. But the insects haven't lost their taste for waste: Some modern cockroach species dine on the poop of bats and dinosaurs' descendents, birds.