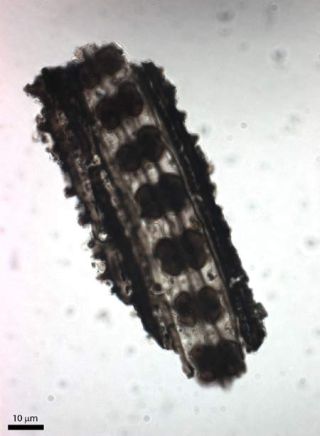 Grass existed on Earth at least 10 million years earlier than was known, based on a new discovery in fossilized dinosaur dung.

It's also the first solid evidence that some dinosaurs ate grass.

While dissecting fossilized droppings, known as coprolites, researchers found tiny silica structures called phytoliths. They are short, rigid cells that provide support to a plant. This type is found exclusively in grasses.

The discovery shows that five types of grass related to modern varieties were present in the Gondwana region of the Indian subcontinent during the late Cretaceous period about 71 to 65 million years ago.

“But pollen are somewhat ambiguous,” study co-author Caroline Stromberg of the Swedish Museum of Natural History told LiveScience. “They could also be from a plant closely related to grasses.”

This discovery could also cause a major shake-up in dinosaur dioramas around the world.

Until now there was no firm evidence that dinosaurs and grasses coexisted, so scientists assumed that herbivorous dinosaurs ate mostly trees, ferns, flowering plants and cycads.

The droppings most likely came from titanosaur sauropods which weighed more than 100 tons and were the heaviest creatures to ever walk the Earth. Although scientists knew from the shape of their teeth that titanosaurs were plant eaters, this is the first proof that dinosaurs snacked on grass.

Not only does this finding call for a reconsideration of dinosaur diets, but for early mammals as well. Many fossilized mammals from the Gondwana region had teeth that could have been used for grazing on grass.

Most grasses grow in dry upland areas where plants seldom fossilize because of degrading chemical processes in the soil. However, based on this new finding, Stromberg believes that grass had spread to the Gondwana region before India became geographically isolated 80 million years ago.

Examinations on the distribution of living grasses around the world point to South American origin, although many scientists believe that grasses may have been widespread before the continents split apart.

The discovery is detailed in the Nov. 18 issue of the journal Science.