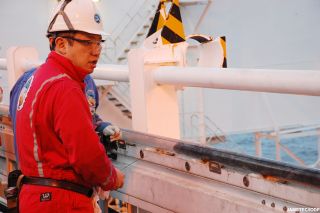 Slippery clay that looks like scaly black dragon skin is the crucial clue needed to explain the 2011 Japan earthquake's surprising impact, according to three studies published today (Dec. 5) in the journal Science.

Scientists now have four lines of evidence (including a February 2013 study also published in Science) that help explain why Japan's earthquake-generating fault acted so weirdly during the 2011 temblor.

"It seems that frictional resistance at this location is getting close to zero, and we never really thought it could go so low," said Patrick Fulton, a geophysicist at the University of California, Santa Cruz and lead author of one of the studies. "This is definitely providing new ideas and challenging our understanding of earthquakes and fault ruptures."

The clay, which resists slipping just slightly better than a banana peel, lines the shallow part of the massive plate boundary fault offshore of Japan, where the seafloor jumped eastward by a staggering 165 feet (50 meters) on March 11, 2011. The enormous surge gave the ocean a giant slap, generating the destructive tsunami that killed more than 15,000 people.

An international scientific team recovered the clay in May 2012, during the first-ever drilling project across a recently shattered subduction zone. Eastward of Japan, two of Earth's massive crustal fragments, called tectonic plates, bash into each other at a boundary called a subduction zone — where the Pacific Plate slides, protesting and groaning, under the Okhotsk Plate. The world's biggest earthquakes (those stronger than magnitude-9) strike on subduction zones.

The Tohoku quake was a magnitude 9.0, but it was like no subduction quake ever seen before. Before the 2011 earthquake, scientists thought subduction zones concentrated their energy deeply, where rocks are strong and plates can stick together between quakes. (Faults store energy between earthquakes kind of like springs, slowly squeezing until the boundary unleashes and everything rips apart.) But the Tohoku temblor was a surprise — the shallow part of the fault shifted twice as much as the deeper part. These soft, muddy rocks were expected to be too weak to store energy between earthquakes. [Infographic: How Japan's 2011 Earthquake Happened]

"We'd never seen such large slip happen at very shallow depth in a subduction zone before," Fulton told LiveScience's OurAmazingPlanet. "It was unheard of."

Today's studies conclude the dragon-skin clay was the earthquake's weak link. The slippery clay helped the plates slide so far during the 2011 temblor.

"All of the tectonic motion was concentrated into this weak layer," said Christie Rowe, a study co-author and fault geologist at McGill University in Canada.

And because the clay layer is a distinctive marker found buried across the Northwest Pacific seafloor, scientists fear subduction zones near Alaska and Russia may also hide this clay. If so, their potential for powerful tsunamis could be greater than thought.

"We think other areas are at risk for this type of event, like Kamchatka and the Aleutians," Rowe said. "It's a sobering thought."

Rowe was one of more than 20 scientists aboard the research ship Chikyu when they successfully drilled into the clay, which the researchers think lines the fault responsible for the 2011 earthquake. The drillers pierced through more than 2,700 feet (800 meters) of seafloor and 4 miles (7,000 m) of ocean to reach the fault.

According to seismic surveys, the fault at the three drill sites is relatively flat; a classic shape geologists call a décollement, the studies report. (The plate boundary fault actually extends for hundreds of miles, diving down into Earth's mantle beneath Japan.)

When the scaly clay that marks the plate boundary fault appeared on deck, scientists gathered around and peered at it through a plastic casing, grinning at the sight. Later, in the shipboard labs, researchers simply stared at it in awe for a while before divvying up samples, Rowe said.

"It was superexciting," she said. "We knew we had crossed the plate boundary."

The lustrous clay is likely less than 16 feet (5 m) thick — the top and bottom were lost in retrieving the core — and the layer switches color back and forth from black to ochre. The scaly texture is common in seismically tortured clays. It's so slippery it feels like a lubricant, Rowe said.

Laboratory tests conducted at the University of Tsukuba in Japan, led by research scientist Kohtaro Ujiie, confirm the clay is weak under stress. These experiments simulated different types of earthquakes, such as small, moderate and large. The research revealed that the clay becomes even more slippery when it's wet and exposed to extreme friction, such as during the 2011 quake, Ujiie reported in Science.

How hot was it?

Another key measurement that confirmed the shallow fault was slippery and weak during the 2011 earthquake was the team's temperature probe. After the rock sampling finished, drillers installed temperature sensors in a borehole across the fault, which were then collected by a remotely operated vehicle after nine months.

"This is a really, really small number — many times less than what we generally thought most rocks had a friction coefficient of [such as 0.6], and it tells us that the fault had very little to zero resistance during the earthquake," Fulton said. "It was very slippery."

This friction data will be a critical puzzle piece in better understanding earthquakes, he said. It's one of the only direct friction measurements ever obtained from a fault after an earthquake.

The studies add more evidence to a growing body of research that faults may get very weak when they slip at very high speeds, Fulton said. This behavior has been seen in laboratory experiments with rocks from fault zones, and computer simulations. However, alternative models have been proposed to explain the unusual behavior of the Tohoku earthquake.

"The [drilling project] findings bring us closer to determining which of these views is correct," Kelin Wang, a geophysicist with the Geological Survey of Canada who was not involved in the study, wrote in a commentary on the studies, also published today in Science.

The studies are only the first of many to come from the drilling project. Scientists are analyzing fossil and ash layers from the drill core to correlate the rocks with layers elsewhere in the Pacific. Another project involves measuring the effects of aftershocks on the fault, via the borehole used to monitor temperature. Researchers also plan to search for the dragon-skin clay in other subduction zones, and model how it changes its behavior deeper in Japan's subduction zone. Finally, there are plans to compare the friction results to other active fault drilling projects in Costa Rica, China and Taiwan. [The 10 Biggest Earthquakes in History]

And scientists still have to figure out how the weak dragon-skin clay can store seismic energy between earthquakes, or if another mechanism is at work.

"There's been a lot of conversation and argument, because the clay is so weak it's impossible to imagine it building up a lot of elastic strain to drive earthquakes," Rowe said. "In the 21st century, we've had less than 10 magnitude-9 earthquakes, and each one teaches us something completely new."