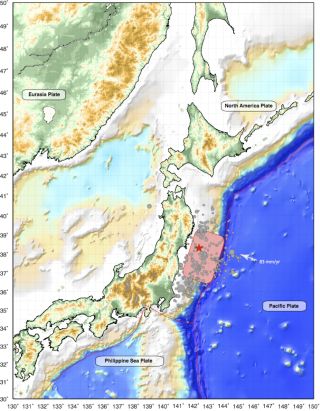 A triple disaster — earth, water and nuclear — struck Japan on March 11, 2011, when the biggest earthquake in its history ripped the seafloor.

The magnitude 9.0 Tohoku earthquake and tsunami shattered lives. The destruction surprised the world, because few expected a quake or tsunami of that size even in seismically active Japan. Some 300,000 people are still homeless, living in residential camps, according to the Japanese government.

Two years later, geologists still puzzle over Tohoku. During the earthquake, the giant offshore fault that ruptured behaved differently near the surface than it did deep below the Earth's crust. This was unexpected, and now, scientists think, it could happen elsewhere. No subduction zone is safe from a megaquake.

Tohoku also emphasized that monitoring the creaking Earth isn't enough when it comes to predicting risk. In Japan, scientists had forecast earthquake hazard by watching Earth's crust deform, and looking at the country's excellent record of historic earthquakes. Based on those records, the subduction zone off Japan should never have produced a magnitude-9.0 quake, most scientists thought. Now geologists believe they need to look further into the past, thousands of years, to capture a fault's true history.

"The instrumental data and observations are about 120 years old, but the history of plate tectonics is over 4 billion years old," said Fumiko Tajima, a seismologist at the Ludwig Maximilian University in Munich, Germany. "Using the seismic catalog to predict an earthquake is like using the data for one second [of Earth's history]. The statistics are not sufficient at all."

Indeed, the Tohoku quake may have been the final nail in the coffin for a dying concept: that faults produce the same size earthquake every time, and that they are regular, repeatable and predictable. When it comes to earthquake hazards, the science is still very much in the unknown unknowns, said Seth Stein, a seismologist at Northwestern University. [7 Craziest Ways Japan's Earthquake Affected Earth]

"We now realize that things are much more variable in space and time than we would like to believe," Stein told OurAmazingPlanet. "That in turn creates a deep uncertainty in our ability to forecast the future."

Japan sits above a subduction zone, a collision zone between two of Earth's tectonic plates. East of the island nation, one plate descends beneath the other, bending down into the planet's deeper depths.

Japan's official seismic hazard maps were based on several centuries of earthquake records, as well as modern deformation in the seafloor. This led the government to underestimate both earthquake and tsunami risk — only a magnitude-7.5 was forecast for the region hit by the Tohoku quake.

But hints of a giant wave, in A.D. 869, had been found far inland in Sendai, a town where thousands died in the 2011 tsunami. Many researchers before Tohoku had published the tsunami records, but earthquake modelers didn't believe the geological data because their models

didn't replicate them, said James Goff, a tsunami geologist at the University of New South Wales in Australia.

"What has now happened as a result of the 2011 earthquake is a growing recognition of the incredible value of an understanding of tsunami geology," Goff said.

Japan is now heavily investing in understanding its tsunami history, bringing in experts from around the world to search its coastlines for evidence of ancient waves. Researchers are also developing new models to better understand how quickly these historic tsunamis moved, how high they were and perhaps even reveal how big the earthquakes that caused them were. [History's Biggest Tsunamis]

The Tohoku tsunami has helped with this search. The tsunami went so far inland that the sediments it left behind are different than scientists expected, giving those looking for signs of historical tsunamis other clues to search for.

"The community is realizing that we have to move beyond just looking for the sand that's deposited by the tsunami," said Bruce Jaffe, an oceanographer with the USGS in Santa Cruz, Calif.

Jaffe and Goff were in Sendai last Thursday (March 8) for a workshop on the tsunami, as well as hunting for new deposits. Jaffe said he's found signs of the A.D. 869 Jogan tsunami north of Sendai. "Tsunami geologists are having to learn how to find tsunami deposits in different environments than we've looked in the past," he said.

Japan is also investing millions of dollars in offshore monitoring to fill in another knowledge gap. A shallow section of the subduction zone that wasn't supposed to break in an earthquake moved in a massive block during Tohoku, and was responsible for the tsunami's massive size. [Infographic: How Japan's 2011 Earthquake Happened]

This shallow zone is hard to see with on-shore seismic monitoring instruments, said Mark Simons, a geophysicist at Caltech in Pasadena, Calif. "The big failure before this earthquake in terms of the geodetic community was they biased themselves to this belief that the trench couldn't slip seismically," he said.

Along the subduction zone, the fault is where the two plates meet in a planar surface. The mosaic-like surface has some parts that stick and some that slide smoothly. These sticky zones are where earthquakes strike. The smooth, sliding sections, what geologists call creep, aren't supposed to have earthquakes.

But Tohoku was a surprise, because the entire fault ripped apart, from the sticky, deep depths to the smooth, creeping surface. The total displacement, which is the relative movement between the two plates, was a shocking 260 feet (80 meters), by some estimates.

"There was significant slip up to and including the trench, an area that was always creeping and had no potential for seismogenic slip. That was a surprise," Simons said.

During an earthquake, the sides of a fault rip apart like a piece of Velcro. Usually, it immediately seals back up. As the rupture ripples along the surface, it won't push up a big section of seafloor all at once, because the displacement moves a small section of earth at a time. Rip open, seal back up. "This is what most people felt, and it was not much different than a magnitude 8.0," Simons said.

But in the slow earthquake, the fault heals more slowly, so more of it moves at the same time. During Tohoku, the shallow fault shifted as a single gigantic block, and accounted for much of the total fault movement. This is why the tsunami was so huge, researchers came to realize. An area of seafloor the size of Connecticut jumped anywhere from 16 to 30 feet (5 to 10 m), shoving water toward Japan.

"It moved the ocean floor in one big coherent piece, and that displaced a lot of water at the same time," Hardebeck, of the USGS, said.

It will likely be another thousand years before the Tohoku segment of the fault unleashes another megaquake. The temblor was a total release, wiping out all the accumulated stress between the two plates, a recent study found. The big question for Japan is what will happen immediately to the south, near Nankai.

After Tohoku, geologists are even less sure of the answer, but they are improving means to keep people safe.

Government warnings of the size of the Tohoku earthquake and tsunami were based on the deeper rupture, where the earthquake started, and thus underestimated the enormity of both, Tajima, of LMU, said. While hundreds of thousands of lives were saved by the warnings, thousands were lost because people believed the country's protective seawalls would hold, government reports found. Some also missed the later, revised warnings.

After the 1995 Kobe earthquake, which killed 6,000 people, Japan strengthened its buildings, bridges and roads. In the Tohoku earthquake, less than 10 percent of the deaths were from shaking damage, according to UNESCO reports. Most of its victims, 15,870 people, drowned in the tsunami. [Related: Japan's Biggest Earthquakes]

Japan is now spending millions on a massive network of ocean bottom sensors and tidal gauges to prevent another missed estimate. The seismic network will also help answer some of the outstanding questions about the fault's behavior near the surface, the missing gap in the models.

Similar seafloor warning networks exist nowhere else in the world, even in the United States, where the Cascadia Subduction Zone has pummeled the Northwest with tsunamis many times in history. However, there is a U.S. and worldwide tsunami warning system. California hopes to build its own early warning network, modeled on Japan's.

"There is no guarantee of earthquake safety unless you prepare for it properly," Tajima said. "We do have the ability to issue an alarm, so that people near the coast can move to a higher area because of tsunamis. People should know that there's no guarantee in an earthquake area, but if they prepare for [the] risks associated with tsunamis properly, then they can reduce or avoid hazards."

For geoscientists, Tohoku was a reminder of the complexities of nature, Stein, of Northwestern University said. "It's really starting to sink in that the world is much more complicated than we would have liked to believe."