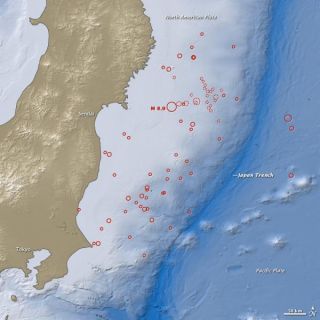 The devastating earthquake that struck Japan in 2011 may have unexpectedly released nearly all of the energy that had built up near the source of the resulting tsunami, new research suggests.

These findings, detailed in tomorrow's (Feb. 8) issue of the journal Science,may help lead to a better understanding of how earthquakes and fault zones work, "and with a better understanding, we may be able to anticipate extreme events or find out where super-large earthquakes might be possible in the world," researcher Fred Chester, a geophysicist at Texas A&M University, told OurAmazingPlanet.

The magnitude 9.0 Tohoku-Oki quakewas the most powerful earthquake to hit Japan and the fifth-most powerful quake ever recorded, generating a tsunami that killed thousands and triggered a nuclear crisis. Research revealed the seafloor moved nearly 165 feet (50 meters) during the temblor.

Earthquakes are caused by stress that builds up on faults in the Earth's surface. Usually, earthquakes are thought to release only a portion of this stress on the fault, but thecatastrophic level of activity seen with the 2011 temblor suggested that this quake may have relieved significantly more energy in that area — a boundary region where the tectonic plates that make up Earth's surface meet. [7 Craziest Ways Japan's Earthquake Affected Earth]

Drilling into the fault

To explore this possibility, researcher Weiren Lin at Japan's Agency for Marine-Earth Science and Technologyand colleagues set out aboard the scientific drilling vessel Chikyu to about 60 miles (93 kilometers) from the epicenter of the quakeabout a year after the disaster. The expedition analyzed rock as they drilled boreholes 2,790 feet(850 meters) into the seafloor about 22,600 feet (6,890 m) underwater.

"The expedition was incredibly challenging — we were really pushing the depth limits and our equipment at this site," Chester said. "Another challenge was the 'rapid response' nature of this expedition — most scientific drilling operations like this in the deep ocean take years of planning, and we only had 13 months. We were delayed a lot by weather and by key equipment failures, but with perseverance and highly capable drilling engineers, we were able to succeed."

To measure the amount of stress in the rock, the investigators analyzed how resistant rock in the borehole was to the flow of electric current. The more stressed rock is, the more fractures result when drills bore into it, and the more fractured rock is, the lower its electrical resistivity (meaning the current flows more easily through it). By continuously measuring how electrically resistant the rock was as the borehole was drilled, the scientists could deduce the magnitude and even direction of the stress in the rock.

The researchers found the present amount of stress on the fault is nearly zero, revealing the earthquake released nearly all the stress there.

"It is very surprising that this can occur," Chester said. "Studies over the past 30 or 40 years have shown that it's very hard to slide rock against rock due to the amount of friction involved, and studies have shown that in conventional earthquakes and smaller faults, only 10 percent or some other small fraction of the stress is releasedwhen these blocks of rock slip past each other."

"However, increasingly, it's becoming clear that these plate boundary faults are weak," Chester added. "It's as if there's much lower friction than one would expect, and they can release a substantial amount of their total stress."

Analysis of rock samples gathered from one borehole and scientific instruments placed within another will glean further insights into the huge quake.

"We're measuring the temperature across the fault zone after the earthquake," Chester said. "The higher the stress in an area, the more frictional heat is generated, so measuring temperature is another way at getting at the question of how much stress was relieved and the strength of the fault during the rupture."