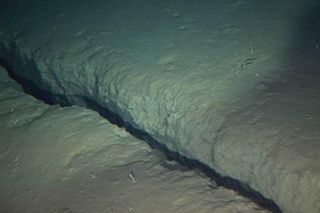 SAN FRANCISCO - The March 2011 megaquake off the coast of Japan opened up fissures as wide as 6 feet (3 meters) in the seafloor, a new study finds.

The fissures now scar the seafloor where peaceful clam beds once lay, according to Takeshi Tsuji, a researcher at Kyoto University in Japan. Along with seismic studies, the fissures, revealed by manned submersible vehicles that investigated the seafloor after the quake, show how the crust around the quake's epicenter expanded and cracked.

Tsuji and his colleagues had a unique opportunity to see how the seafloor changed after the magnitude-9.0 quake struck on March 11. Before the quake, the researchers had taken video and photographs of the seafloor on the continental side of the Japan Trench, near where the crust would later rupture, generating an enormous tsunami that killed about 20,000 people.

Those videos showed a quiet seafloor broken only by occasional clam beds, Tsuji reported here today (Dec. 6) at the annual meeting of the American Geophysical Union (AGU). After the quake, however, the seabed shows evidence of the massive forces released there.

Approximately 10,500-to-17,500-feet (3,200-to-5,350-meters) below the ocean's surface, the researchers saw open fissures in "many places," Tsuji said. They ranged from around 3-to-6-feet (around 1-to-3-meters) across, though the researchers couldn't measure how deep these new cracks extended.

By combining their direct observations with seismic surveys of the seafloor, the researchers uncovered a series of complex faults around the zone where the continental crust off the coast of Japan is being forced under the Pacific tectonic plate. They found when the crust ruptured some 12 miles (20 km) below the planet's surface, it was powerful enough to rip all the way to the surface.

That rupture pushed up a massive amount of seafloor, which in turn triggered the huge tsunami that devastated the coast.

Meanwhile, the wedge of crust where the quake struck was not only thrust outward, but extended horizontally like an accordion, Tsuji reported. That explains the fissures, which occurred as the crust got stretched.