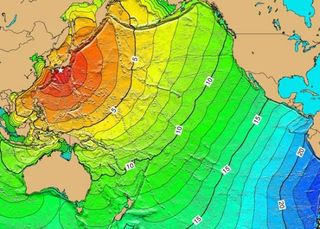 The devastating tsunami that struck Japan last March killed more than 15,000 people, disrupted power and services across the country and crippled the Fukushima Dai-ichi nuclear power plant. The massive waves were triggered by a 9.0-magnitude earthquake that gave the sea floor a huge shove toward Honshu, Japan's largest island.

But exactly how much the earth moved in the quake has been unclear — until now.

A new look at the sea floor before and after the 2011 Tohoku earthquake reveals massive shifts in the ocean crust. Energy from the uplifted sea floor — which was thrust 164 feet (50 meters) horizontally and 33 feet (10 meters) vertically — triggered the immense tsunami waves that struck the coast of Japan.

The magnitude of the Tohoku quake made it possible for scientists to detect the shift with common sea-floor-survey techniques, something that "has never been done before," said Toshiya Fujiwara, a geophysicist at the Japan Agency for Marine-Earth Science and Technology.

Fujiwara's team used multibeam bathymetric surveys — which use echolocation to measure water depth and the shape of the underlying sea floor — to map areas around the Japan Trench after the quake. The team compared it with similar data taken in 1999 and 2004 from the same swath of sea floor. The difference between the data sets revealed large displacements in the ocean crust — more than 100 times greater than shifts measured after other earthquakes.

"We didn't expect the displacement to be detected by using such an ordinary sea-floor-survey instrument," Fujiwara said. "Crustal movement usually happens on a millimeter- or centimeter-scale, not over 10s of meters."

The 2005 7.2-magnitude Miyagi earthquake, for example, registered a shift of 4 inches (10 centimeters) at a geodetic station near the Japan Trench. The 2011 Tohoku quake measured 49 feet (15 meters) at the same station, said Fujiwara — larger by more than two orders of magnitude. In other words, most quakes give the sea floor a gentle nudge, but the Tohoku quake gave it a huge shove.

In addition to the 33-foot (10-meter) vertical shift, a large slab of ocean crust between the Japan Trench and the Honshu coast was boosted upward another 12-18 feet (4-6 meters) or more, Fujiwara's team found.

This uplift helped generate the "massive pulsating pattern of tsunami waves" that hit Japan, the team explains in their paper, which will appear in the Dec. 2 issue of the journal Science. [History's Biggest Tsunamis]

The fault that shifted the ocean crust so dramatically likely extends all the way to the axis of the Japan Trench, Fujiwara said, further highlighting the magnitude of the Tohoku quake.