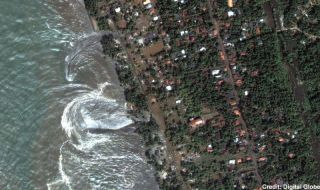 Some of the biggest, most destructive and deadliest tsunamis on record:

8,000 years ago: A volcano caused an avalanche in Sicily 8,000 years ago that crashed into the sea at 200 mph, triggering a devastating tsunami that spread across the entire Mediterranean Sea. There are no historical records of the event – only geological records – but scientists say the tsunami was taller than 10-story building.

Nov. 1, 1755: After a colossal earthquake destroyed Lisbon, Portugal and rocked much of Europe, people took refuge by boat. A tsunami ensued, as did great fires. Altogether, the event killed more than 60,000 people.

Aug. 27, 1883: Eruptions from the Krakatoa volcano fueled a tsunami that drowned 36,000 people in the Indonesian Islands of western Java and southern Sumatra. The strength of the waves pushed coral blocks as large as 600 tons onto the shore.

April 1, 1946: The April Fools tsunami, triggered by an earthquake in Alaska, killed 159 people, mostly in Hawaii.

July 9, 1958: Regarded as the largest recorded in modern times, the tsunami in Lituya Bay, Alaska was caused by a landslide triggered by an 8.3 magnitude earthquake. Waves reached a height of 1,720 feet (576 meters) in the bay, but because the area is relatively isolated and in a unique geologic setting the tsunami did not cause much damage elsewhere. It sank a single boat, killing two fishermen.

May 22, 1960: The largest recorded earthquake, magnitude 8.6 in Chile, created a tsunami that hit the Chilean coast within 15 minutes. The surge, up to 75 feet (25 meters) high, killed an estimated 1,500 people in Chile and Hawaii.

March 27, 1964: The Alaskan Good Friday earthquake, magnitude between 8.4, spawned a 201-foot (67-meter) tsunami in the Valdez Inlet. It traveled at over 400 mph, killing more than 120 people. Ten of the deaths occurred in Crescent City, in northern California, which saw waves as high as 20 feet (6.3 meters).

Dec. 26, 2004: A colossal earthquake with a magnitude between 9.1 and 9.3 shook Indonesia and killed an estimated 230,000 people, most due to the tsunami and the lack of aid afterward, coupled with deviating and unsanitary conditions. The quake was named the Sumatra-Andaman earthquake, and the tsunami has become known as the 2004 Indian Ocean tsunami. Those waves traveled the globe – as far as Nova Scotia and Peru.

March 11, 2011: A massive 9.0-magnitude earthquake struck northern Japan, triggering tsunamis that reportedly swept up cars, buildings and other debris. The Japan Meteorological Society has forecast more major tsunamis in the area, with some expected to reach more than 30 feet (10 m) off the coast of Hokkaido, Japan's second largest island. A tsunami was also generated off the coast of Hawaii, one that could cause damage along the coastlines of all islands in the state of Hawaii, according to the Pacific Tsunami Warning Center. Tsunami warnings are in effect across Hawaii as well.