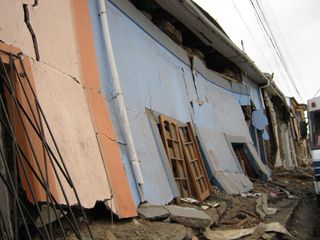 Extraordinarily high-resolution new GPS data from the giant earthquake that struck Chile in 2010 are uncovering new clues about the largest quakes in the world, including the megaquake that devastated Japan last month.

These new readings have revealed, for instance, the actual epicenter and extent of the rupture of the magnitude 8.8 Chile quake, which is the sixth-largest ever recorded.

Very little is known about the physics of giant earthquakes -- those of 8.5 or greater -- simply because there have been very few of them in recorded history. Now, however, global positioning system, or GPS, receiver stations can measure precisely what happens to the Earth's surface during quakes, allowing researchers to model them in unprecedented detail.

"We were very lucky in that we had installed several instruments right over where the rupture happened," said researcher Christophe Vigny, a geophysicist at the French National Center for Scientific Research in Paris. "We had the capacity to measure changes with an accuracy of a couple of millimeters."

An international team of scientists analyzing the data found that the actual epicenter of the Chile megathrust quake -- the point on the Earth's surface directly above the rupture of a fault -- was apparently about 25 miles (40 kilometers) southwest of initial estimates.

The team was also able to see that the rupture spread across about 310 miles (500 km) of the approximately 2,500-mile-long (4,000 km) zone where the oceanic Nazca Plate is subducting beneath the continental South American Plate.

"Having the exact length of the rupture allows you to assess what stress might remain on the segments that didn't rupture," Vigny told OurAmazingPlanet. "So, about 3,500 kilometers did not break."

The GPS data contain apparent kinks in motion the researchers attribute to variations in rupture direction and speed along the fault. They think this is related to the unusual size of the quake, which ruptured two regions that had been under stress since earlier quakes in the region in 1835 and 1928.

As to why this event became a megathrust quake, "we think we know how -- the rupture found the conditions to keep going, and there was a critical moment around 60 seconds when it could have stopped but 'decided' otherwise," Vigny said. "Now, 'why?' is another question. We don't know if this was bound to happen -- that we could have predicted it if we had known all the stress conditions prior to the earthquake -- or if there really is something unpredictable in it."

The scientists note that Japan has a network of hundreds of GPS stations that captured details of the devastating earthquake that hit the country in March. Those details, along with the Chile data, are giving them more insight into these enormous quakes.

"What we are learning from the GPS data from Chile and seem to be learning from the preliminary data from the 2011 Japanese quake is that megathrust quakes seem to occur in faults highly 'locked' beforehand -- that is, where the interface between two tectonic plates are completely locked in place and not moving because of friction," Vigny said. "A lot of energy is building up in these areas, and maybe if we see other systems that aren't completely locked, maybe that's a good sign that megathrust earthquakes might not happen there. But we don't really know for sure -- we have so few quakes that we have this kind of data from to judge."

Other locked faults that may cause megathrust earthquakes include the Nankai Trough south of Japan. "That should break any day soon," Vigny said. There may also be another such system in northern Chile, he added.

The scientists detailed their findings online April 28 in the journal Science.