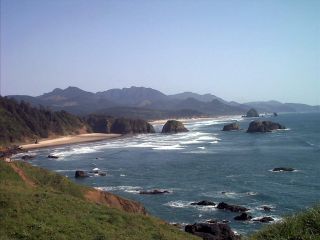 Oregon's idyllic coastline, a region that might be shaken by powerful earthquakes more frequently than once thought.
(Image: © NOAA.)

How can you predict the future if you do not know the past? It's more than an idle existential question for earthquake researchers.

Many of these scientists are trying to peer ever deeper into the past, hunting for the fingerprints earthquakes have left behind in hopes of interpreting them to have a better idea of when the next giant paroxysm will come.

It's an endeavor that often requires geological detective work — and after more than 10 years of literally poring over layers of dirt brought up from the seafloor, newly published research offers the longest rap sheet yet for a colossal fault that snakes along the Northwest Pacific coastline.

The study delves into the past of the Cascadia Subduction Zone, a tectonic boundary that stretches more than 700 miles (1,100 kilometers) from Northern California to Vancouver Island. The exhaustive, 170-page report from a team at Oregon State University (OSU) offers ample evidence that 19 or 20 magnitude-9.0 earthquakes have ripped along the fault over the last 10,000 years.

"That is a remarkable record that goes back a long time," said geophysicist Craig Weaver, the Pacific Northwest coordinator for the U.S. Geological Survey's Earthquake Hazards Program, who was not associated with the research.

Weaver said that it's been known since the late 1980s that the Cascadia Subduction Zone can rupture its entire length all at once, producing magnitude-9.0 quakes — the same magnitude as Japan's devastating March 2011 earthquake — along a fault that is even closer to shore. Yet the new report shows it has done so repeatedly, about every 500 years.

The last magnitude-9.0 earthquake hit in January 1700, and sent a deadly tsunami across the Pacific Ocean to Japan. That event has been well-documented both historically and geologically.

The OSU research also suggests that the very southern end of the fault — a portion that skirts approximately the southern third of the Oregon coast — breaks far more frequently, producing earthquakes in the lower magnitude-8s about every 240 years.

"An earthquake in the low to mid-8 range is still a very large earthquake," said Chris Goldfinger, a marine geologist and professor at OSU who led the research. [Video: Earthquake Magnitude Explained]

It's not clear when an earthquake of similar size last shook this region of the fault, he said. The largest earthquake ever recorded along the Cascadia Subduction Zone was a 7.2 quake that hit the southern end of the fault in 1992, near Petrolia, Calif. A magnitude-8.0 could have hit sometime in the late 1800s, but the data are fuzzy. It could be that one is "overdue."

The peer-reviewed report, put online by the U.S. Geological Survey, is the longest record ever assembled for subduction earthquakes — those that rip along vast faults where one plate dives beneath another, producing the most powerful earthquakes on the planet. And the research relied on evidence trapped for millennia beneath the seafloor, in deep water some 50 to 100 miles (80 to 160 km) from land.

Goldfinger set out more than a decade ago to uncover the complicated history of Cascadia's earthquakes. He and his team went to sea three different times between 1999 and 2009 to pluck sediment cores from more than two dozen locations. They retrieved the 20- to 26-foot (6 to 8 meters) tubes of muck and sand from an oceanic plate at the foot of an extremely long slope — literally, the end of the North American plate, where the continental shelf drops steeply away, plunging to meet the Juan de Fuca plate, which is grinding slowly beneath it, birthing colossal earthquakes when it jolts suddenly deeper.

Goldfinger and his team were in search of turbidites — not beastly fossils or weird rocks, but something far more prosaic: layers of muck trapped among other layers of muck.

Turbidites are coarse layers of sand and sediment that stand out from the fine-grained layers of silt stacked below and above them. "When we take a core and split it in half, the earthquake deposits are very, very obvious," Goldfinger said.

His research suggests that earthquakes are the only things powerful enough to send these waves of coarse sediment tumbling all the way down the slope of the North American plate to come to rest on the oceanic plate below.

Carbon-dating showed the turbidites matched up well with other types of earthquake indicators researchers have found on land. And in fact, Goldfinger said, turbidites are more plentiful and "are actually very sensitive recorders of earthquakes, so we can see smaller earthquakes than we see on land."

In addition, Goldfinger said, it appears that each earthquake leaves a unique fingerprint in the sediment it sends flying. Even earthquakes that have the same magnitude shake in unique patterns, essentially drumming a kind of Morse code into the turbidites. This allowed the team to link sediment layers from up and down the coastline to one another, thus further homing in on the reach of a given earthquake.

What does it mean?

Although the full report on Cascadia's 10,000-year history was put online only recently, much of the data have been available for several years. In 2010, there was a spate of press coverage. Media reports surfaced again the following year, after the devastating magnitude-9.0 subduction earthquake hit Japan in March 2011, reviving fears of a similar event on the other side of the Pacific.

Yet despite headlines that point to a looming "monster" quake, it is the report's conclusions on the more frequent, slightly less powerful earthquakes along Cascadia's southern edge that have caused the most ruckus among scientists. Not everyone agrees that the evidence points to magnitude-8.0 quakes approximately every 240 years. [The 10 Biggest Earthquakes in History]

"This is one study — and it's a very important study — but it's still just one study," Weaver said. There could be alternate explanations for some of the southern turbidites, he said.

Getting to the bottom of this question isn't merely an academic exercise, or just an issue of public awareness — it has big economic implications, too. Earthquake research plays a major role in building codes. Revisions that reflect a need for sturdier structures mean higher building costs — and before any changes are made, the evidence is closely examined, Weaver said.

The U.S. Geological Survey has included giant, magnitude-9.0 earthquakes in its seismic hazard assessments for the region since 1996, Weaver said. Those smaller, more frequent quakes are not included in the assessments — and, in turn, the building codes — and it's not clear if they ever will be.

"The big ones have a lot of consistency in them. That has convinced people this is the likely interpretation of these data," Weaver told OurAmazingPlanet. "When you get down to the smaller ones, people are much less convinced that this is the only explanation for these events, and hence the caution."

Goldfinger's research has been discussed during at least two recent workshops on seismic hazard assessments, yet there are nearly 10 more meetings to go before the USGS releases the next generation of seismic hazard maps for the lower 48 states, likely in early 2014. [Natural Disasters: Top 10 U.S. Threats]

Goldfinger himself is not taking any chances. He lives in the southern coastal region of Oregon affected by those "smaller" quakes — though a magnitude-8.0 is small only in comparison to a magnitude-9.0, which is more than 30 times more powerful.

He was so convinced by what he saw in the turbidites that he bought earthquake insurance while still at sea a few years ago, and has added various protections to his home.

Goldfinger said there's a 40 percent chance that one of these quakes will happen in his corner of the state sometime in the next 50 years. "So that really brings the schedule of getting prepared for this much further forward," he said.